Coronavirus: ‘I’ve planned a holiday to northern Italy. Should I cancel?’

Conor Pope: A number of people have contacted us about their upcoming travel plans 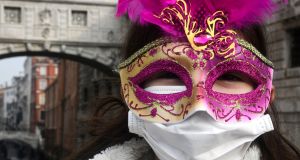 A young tourist wearing a protective facemask and a carnival mask visits the streets of Venice. Photograph: Andrea Pattaro/AFP via Getty Images)

With the dramatic spike in the number of cases of Covid-19 across northern Italy, people from Ireland planning to travel to the region are beginning to look at their trips with a degree of nervousness. Four people have died of the coronavirus in Italy, and the country has seen the first major travel restrictions to be imposed in Europe.

A number of people have been in touch expressing concern about their upcoming plans or those of family members. One is planning to go to a campsite in northern Italy this summer, while another has a teenage child travelling to the region as part of a transition year tour in April.

So, what is the best advice? People should avoid panicking for starters. This is a fast moving situation and it is very difficult to say with any certainty where we will be by the time the summer holidays come round.

The first place everyone should turn when it comes to travel arrangements to any part of the world now and in the weeks ahead is the Department of Foreign Affairs (DFA). On Monday morning the DFA issued an update concerning Italy. It noted the increase in the number of confirmed cases of the coronavirus in Italy and said that “as a result, the Italian government has provided in law for certain administrative areas, where necessary, to take appropriate actions”.

Among the actions are restriction of movement into and out of those areas, restriction of certain transport services, suspension of demonstrations and meetings, closures of certain businesses, cessation of some public services, closures of schools, universities and museums. More than 50,000 people in northern Italy in a number of towns in the Veneto and Lombardy regions have been quarantined.

Irish citizens are advised not to travel to affected areas. But what are the affected areas? It is important to stress that the situation is fluid and changing hour to hour, but as it stands the Italian government has ordered the isolation of 10 small towns in Lombardy.

Those towns are Codogno, Castiglione d’Adda, Casalpusterlengo, Fombio, Maleo, Somaglia, Bertonico, Terranova dei Passerini, Castelgerundo and San Fiorano. These are mainly southeast of Milan. There is also one town in Veneto, Vo’ Euganeo – south of Vicenza.

The department says travellers, to ascertain whether their destination in Italy is in an affected area, should consult with their transport and accommodation providers, the regional government website of the region in question or, if they are in Italy, call 1500.

Blanket travel bans to countries for tourists are rare, although one was issued for China last month. In that advisory, Irish citizens were told to avoid non-essential travel to that country as the number of coronavirus deaths and confirmed cases continued to rise sharply. It said the situation was “very fluid and it is likely that increasing containment measures will be deployed”.

If an official advisory against travel is in place, then people who have booked independent holidays and have travel insurance should be able to claim for any losses they are likely to incur, while tour operators should also process refunds or reschedule trips if the State has warned its citizens against travel to a particular country.

There is no suggestion right now that people should cancel or curtail trips to tourist spots in Italy. Anyone looking to cancel a summer holiday to a campsite in northern Italy today would probably not be able to make any claim on their travel insurance.

But of course people will have to make their own choices.

As it stands airlines are continuing to fly to the impacted regions in Italy although both Ryanair and Aer Lingus are said to be keeping a “watching brief” on the situation as it evolves.

The general advice for people travelling to and through countries where the number of cases is high is to be aware of delays and checks when entering or leaving the country, with the risk of delay or cancellation “particularly heightened if any person travelling exhibits symptoms of fever, respiratory illness, and coughing”.

Travellers and residents should take particular care to observe food safety and travel precautions and the wearing of single-use masks, regular washing of hands with an alcohol-based soap are strongly recommended by the World Health Organisation.

Public gatherings are best avoided, and care should be taken on public transport. Hand sanitiser is essential, although there are mixed reports about the merits of face masks.

And don’t forget the basics: wash hands with soap and water, especially after touching surfaces or coming into contact with someone who has been coughing; avoid close contact with others if you’re sick; and have your flu job.

While the focus is on Italy today, the chances of a coronavirus case occurring in Ireland have “significantly increased” in light of the Italian outbreak, and the State is now preparing for the likelihood that there “could well be a case in Ireland in the coming days and weeks”, Minister for Health Simon Harris said.

“You have to evaluate your trip week to week, if not day to day,” Bernard Camins, the medical director for infection prevention at the Mount Sinai Health System, has told the New York Times. “But if you’re looking at a place where there are no cases, there’s no question you should continue on your trip.”

So, the best advice right now is probably to sit tight and see what happens next.