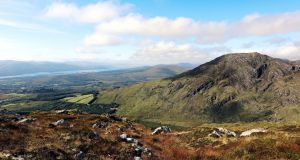 The 360-degree panorama from the top of Peakeen stretches from the Purple Mountain, the MacGillycuddy Reeks, Mullaghanattin and the Dunkerron Mountains of Iveragh

Like the Pillars of Hercules, two small but formidable peaks (each over 500m) guard the southern end of the Old Kenmare Road that forms part of the Kerry Way. More frequently admired than ascended by those traversing the Way-marked trail, Peakeen and Knockanaguish are well worth a visit for the wonderful vistas they offer.

As I walked up the track the rocky precipices of the mountains narrowed to form a gorge. I speculated on its possible formation.

A small glacier would have cut the upper part of the valley, which then would have been a convenient conduit for the turbulent torrents of melt water issuing from the retreating Reeks ice cap. This would have bounced the rock debris left by the glacier along the floor of the valley, eroding a narrower and deeper ravine.

The early morning sun highlighted the craggy east face of Peakeen ( 555m) so I decided to tackle it first. The best route to avoid the cliffs is to walk to the highest point on the track and then head up between the outcrops. Near the top go right to pass under the north-facing cliff below the summit until you can safely ascend to the Triangulation Station.

As on all free-standing hills there is a 360-degree panorama, this one stretching from the Purple Mountain, the MacGillycuddy Reeks, Mullaghanattin and the Dunkerron Mountains of Iveragh.

Such a scene brings back memories of so many adventures and the occasional misadventure on these mighty mountains.

As I sat there a band of cloud drifted across the middle slopes of the Reeks, turning the upper slopes with their jagged ridges into an exotic island in the sky. Eventually the whole massif was enveloped, and I retraced my steps back to the track.

The route up Knockanaguish (509m) is straightforward. Just head back towards Kenmare under its rocky western face until you spot a grassy ramp. This leads up to a fence, and then it’s just a question of following that to the summit.

Retrace your steps on the descent. As well as the mountains to the north the peak provides an entrancing view of Kenmare Bay, whose waters sparkled under the dark outline of the Beara Peninsula.

Over Kenmare Bay a sea mist was forming, giving me the fanciful notion that the sea had begun to boil just as my blood began to simmer as I recalled the chicanery of Lord Landsdown, the Earl of Kenmare. You will notice on the Ordnance Survey Map that this fine broad body of seawater is referred to as the Kenmare river; a nomenclature I refuse to use.

In the early 19th century, when the earl was a minister in his majesty’s government, his lordship got an act of parliament passed to have the bay redesignated a river. As the landowner in the area this gave him the fishing rights out to the mouth of the Bay.

To paraphrase Mahatma Gandhi: “The sea provides enough to satisfy every man’s need but not every man’s greed.”

Start and finish: There is room for three or four cars at the start of the Old Kenmare Road track. Larger groups could use the car park opposite the church in Kenmare.

How to get there: Head north along the third class road past the church in Kenmare.