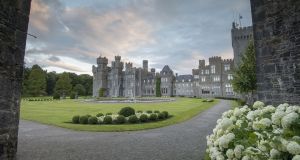 Ashford Castle, in Cong, Co Mayo, is the only one of the eight to be awarded five stars in Forbes’ 2020 Star Awards; it is also the first Irish hotel to receive the guide’s top rating.

We are honoured to be the first and only hotel in Ireland to have achieved the prestigious @ForbesInspector Five-Star rating!

Every day, our team go above and beyond to make every stay special - this award is a reflection of their hard work and passion.https://t.co/vRYiboY1Pw pic.twitter.com/avNkrrRBg3

The hotel, where rooms for a midweek break in March begin at €325 for bed and breakfast, posted on Twitter that is honoured by the recognition. “Every day, our team go above and beyond to make every stay special – this award is a reflection of their hard work and passion.”

The K Club, in Co Kildare, and the Merrion and Marker hotels, in central Dublin, were each awarded four stars. The Westbury, the Shelbourne, the Fitzwilliam and the InterContinental Dublin appeared on the list as recommended hotels.

The guide, which lists 1,898 star-rated properties in 73 countries, says earning a Forbes rating is “the hospitality industry’s most prestigious achievement, as hotels, restaurants and spas are inspected anonymously and the star ratings can’t be bought”.