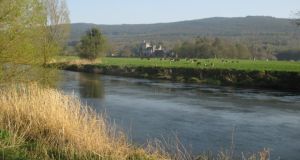 Hugging the banks of the river Suir, this memorable pathway was for many years partially closed due to access problems but has now re-emerged as one of Ireland’s finest waterside rambles

My offering this week comes from the elegant bar of an old Bianconi coach inn that has since morphed into Hearn’s Hotel, Clonmel. Re-exploring my maiden riverbank ramble is why I am here today. Hugging the banks of the river Suir, this memorable pathway was for many years partially closed due to access problems but has now re-emerged as one of Ireland’s finest waterside rambles.

The breeze whispered shyly of summer as I set out earlier from Carrick-on-Suir and followed an upriver towpath populated by leisure strollers and a scattering of river anglers.

This towpath was originally built to accommodate the muscular horses that drew laden barges upriver to Clonmel. Indeed, famous 19th century athlete Maurice Davin, who later became the first president of the GAA, hailed from a prosperous Carrick-on-Suir family that owed its affluence to a river-trading business.

The sweep of the river then led me through lands of milk and honey that provided the wealth to construct the churches, castles and tower houses that richly populate the riverbank.

A boatman punted languidly downstream as I passed the MSD industrial complex, which should not, I reflected, be seen as an unwelcome intrusion but as a huge employer and good example of late 20th building technology.

Soon I had the path to myself and in the solitude the river weaved its tranquil spell for a waterside is, for me, more a state of mind than a place. It occurred to me that nowadays we appreciate rivers almost exclusively for their scenic value but in the past life revolved around our great waterways for they provided a guaranteed water supply, nourishing food from fish and the easiest and most efficient way to transport merchandise.

Rousing from my reverie, I continued upriver past serene Gurteen-le–Poer demesne as the sylvan path gave way to open farmland and a magical prospect of Slievenamon – Co Tipperary’s most iconic mountain.

Crossing the Anner river where it enters the Suir beside an old mill reminded me about a lament for emigration’s loss from 19th century poet Charles Kickham which begins “she lived beside the Anner at the foot of Slievenamon”.

Approaching Sir Thomas’s Bridge the number of strollers thickened around me once again. Built in 1690, the bridge betrays its age by being only able to accommodate one vehicle at a time, but 17th century builders knew their craft for it remains passable when Clonmel’s more modern bridges are closed by flooding.

Now my route coalesced with the arrows for the East Munster Way and it’s a hard surface for the final push to Clonmel. Clearly the river is still central to recreational life in the town for I meet a couple a cyclists and several buggy strollers, while a few oarsmen are out on the water.

Finishing at Clonmel’s, Gasworks Bridge, I then reflected that the Suir Valley river walk still retains a timeless appeal it had when I discovered it 30 years ago.