A taste of the real Hawaii 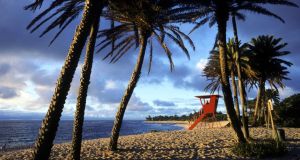 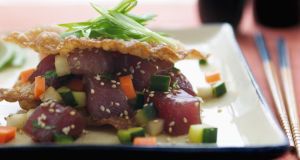 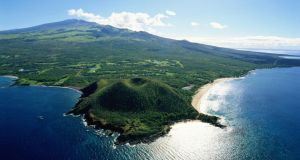 Spend enough time in the company of surfers and everyday tasks like getting buses or filling in forms are transformed from unavoidable inconveniences into an affront to life’s true purpose. Hawaii, the birthplace of surfing and a byword for getting away from it all, has a similar effect. Beauty’s seductive charms are in full effect here, and America’s favourite tropical paradise knows exactly how to seduce visitors with its lei garlands, friendly alohas and perpetually good weather. Initially, I treat all this smiling with unreserved cynicism, but within a few days I’m trying to figure out a way to move here.

At first, though, Hawaii plays it coy. Honolulu, on the island of Oahu, is the main gateway to the archipelago; home to the bulk of the state’s hotels and shopping, it is the kind of place where those looking to get away from it all don’t really have to. It’s also where most visitors to Hawaii will spend their holiday, clustering around the golden beach and glassy, user-friendly waves of Waikiki. Conveniently, the retail distractions of Kalakaua Avenue, Honolulu’s answer to Rodeo Drive, are only a short walk away.

I spend my first night in the Hotel Modern, at Waikiki’s southern edge: its name a hostage to the fortunes of fickle trends but a satisfying example of contemporary design nevertheless – the first-floor pool area and Iron Chef’s Masaharu Morimoto’s restaurant are reasons enough to stay.

Beyond Waikiki’s overcrowded perimeter, Honolulu is a kind of low-rent LA, a city of strip malls and traffic-choked avenues lined with monkeypod trees. I beat a fast exit out of this paved-over paradise and head out along Highway 1 through the heart of Oahu to North Shore, home of the Seven-Mile Miracle, a stretch of three beaches that are the centre of world-class performance surfing. I’m no surfer, but I still want to see what the fuss is all about.

Of the three, Ehukai is the best-known thanks to the Banzai Pipeline, a break that is the ultimate proving ground for the top pros. It is a surfer’s Wimbledon, but with deadly consequences – the incisor-shaped rocks beneath the break have cost the lives of seven top surfers since 1999.

There are half a dozen camera crews on Ehukai, their lenses all trained on one spot, about 100m out to sea, where 10 or so surfers are straddling their boards, waiting. I’m standing at the edge of the beach, next to a group of young surfers with perfect abs and half-lidded stares. We’re all looking in the same direction, but I have no idea what I’m meant to see. I’m hoping that it’s superstar Kelly Slater, the only surfer I’ve ever heard of.

“Who are you watching?” I ask one of them casually, careful not to betray my hopeful ignorance. He turns to me slowly and gives me a look of confusion and pity. “Who . . . ? Nah, brada, we’re just watching the break . . .” he says, trailing off as he turns back to stare at the water.

I stare quietly and try to absorb the awesome sense of place, but nothing really happens. There will be no tube riding today, no spectacular wipeouts at the top of a 20-foot swell – it’s the wrong time of year. After half an hour of watching dots bobbing up and down in the water I leave, disappointed I didn’t at least secure an invite to whatever beachside barbecue my staring companions were probably planning for later on.

I console myself with a shave ice at Matsumoto’s in the nearby town of Haleiwa, a shabby drive-through burg lined with organic cafes and prohibitively expensive beachfront property – you’d need a lot of cash to drop out here. Matsumoto’s is an old-fashioned grocer that Barack Obama likes to visit on his own family holidays – a shave ice (not a shaved ice, I’m reminded when I order) is a glass of crushed ice lathered in artificial flavouring. I order a Tropical (guava, lilikoi and papaya) and halfway through my mouth feels like I’ve eaten packs of sweetener.

I bunk down in the area’s only resort, ideally positioned on a promontory overlooking Turtle Bay. As I walk into the lobby it is all instantly familiar, so I ask the middle-aged check-in clerk how that could be.

“Sir, have you seen Forgetting Sarah Marshall?” She says it in the lifeless tone of someone who’s grown weary of one-liners about her being a real-life Mila Kunis. She perks up when I ask her about a recommendation for a place to eat, though: she gives an expected thumbs up to the resort’s two restaurants before asking me in a lowered voice if I’ve tried the shrimp trucks.

North Shore’s real gourmet treat, she tells me, is a plate of shrimp and rice from one of a handful of shrimp trucks along the Kamehameha Highway southeast of Haleiwa. The best are clustered around the shrimp farms at Kahuku – Romy’s and Fumi’s are more stands than trucks, but they serve exclusively fresh shrimp from their adjacent farms. The most famous of them all, Giovanni’s, is so successful it has to resort to buying shrimp from a wholesaler who can’t guarantee that it’s locally sourced.

In Hawaii, locally sourced has become a big deal, a mark of authenticity with more credibility than a lei or a beachside luau. Geography has made it an ethical imperative: 4,000km from the nearest continental shore, Hawaii is the most isolated population on earth, the furthest you can be from anywhere and still find a decent restaurant – more and more of which have embraced the farm-to-fork movement.

After a few days in Oahu, I fly to Maui, Hawaii’s second-most popular island and the kind of tropical idyll I’ve travelled 10 time zones to experience. The west coast is all golden beaches and fancy resorts, the east dominated by the Haka Highway, 109km of hairpin coastal road wending its way through jungle and stunning views.

Overlooking it all is the dormant volcano Haleakala: a sacred place and the ultimate Maui photo-op. I get up at 3am to make it to the crater’s edge in time for sunrise, and frantically snapping away is my way of respecting the islands’ creation legend, dragged out of the ocean by the demi-God Maui who then snared the sun atop Haleakala to slow down its passage so his mother could dry her kapa, or bark cloth.

With the sun now firmly up, I explore Maui’s upcountry, whose volcanic fecundity make it the ideal centre for the locavore movement and where – I never quite found out exactly – Oprah has a hidden pile, accessible only by private road.

On the volcano’s leeward side, Ulupalakua is a huge ranch with 16,000 head of cattle and a general store straight out of the Wild West. Across the road from the store is the Tedeschi winery, which produces reds, rosés and its own distinctive pineapple sparkling white – a gold medal winner at the Los Angeles International Wine & Spirits Competition.

Not far away, in lower Kula, I visit the wonderful Surfing Goat Dairy, founded by two German expats with a love of goats’ cheese: as it happens, everyone else seems to love it too, and they now sell their produce to over 30 restaurants in Maui and Oahu. They make dozens of different cheeses here; I try a bunch of them and settle on Udderly Delicious, a plain salted chèvre that was served at President Obama’s second inauguration dinner.

A couple of miles from the Surfing Goat I get the sweet, balsamic whiff of lavender before I see the fields awash with purple. It is the Ali’i Kula Lavender farm, founded just over a decade ago by Buddhist horticulturist Ali’i Chang. More than 55,000 plants from 45 varieties of lavender grow across its 13.5 acres, and the guided tour along the pathways is the most surprisingly enjoyable experience I have during my stay.

The harvested lavender is found everywhere in Maui, from aromatherapy treatments in hotel spas to food ingredients: later that evening, I am thrilled to discover that the Ka’ana restaurant in the (fabulous) Andaz Hotel in Wailea buys both Ali’i lavender and Surfing Goat’s cheese for their kitchen. Maybe it was just wishful thinking, but it made an already exquisite meal that much better. It’s also where I ate the best version of Hawaii’s national dish, ahi poke, a diced tuna sashimi I’m pretty sure I’m now addicted to.

Hawaii trades on its looks, so it’s hardly surprising that it’s gorgeous. Whether you’re into an isolated mountain shack with a panoramic view or a full-service resort hotel with flamingos wading in the lobby pool, you can find it here.

It’s all really a matter of taste: whereas most visitors like the palm tree-clad commerce and convenience of Waikiki, I’m with Oprah and the dreamers who opt for Maui’s upcountry – dreamers like Xorin Balbes, who fashioned the dreamy Lumeria Maui resort out of five historic lodge-style buildings originally built in 1910 as a retirement home for sugar plantation employees. Now it’s an “eco-boutique hotel” with 24 beautiful rooms and a mantra of “retreat, recalibrate and restore”.

I’ve been in Hawaii less than a week and the sun and the poke has dissolved the last vestiges of my cynicism: I want to buy a yoga mat, learn to meditate and live here.

United Airlines (united.com) from Dublin via Washington, DC, from €760; intra-island flights with Hawaiian Airlines (hawaiianairlines.com) from $70.