Washing an iPhone with soap is out of the question, PhoneSoap 3 is the next best thing 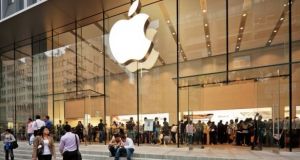 The Apple Watch SE has most of the benefits of previous versions, including being able to track fitness and sleep cycles. Photograph: iStock

November 19th, 2020, is the date that shows the rivalry between Sony and Microsoft is alive and well, with both the PlayStation 5 and Xbox Series X launching on the same day.

Which machine is the “best” is entirely subjective, but the PS5 is launching with a solid line-up, including big-franchise titles such as Spider-Man: Miles Morales, Call of Duty: Black Ops Cold War and potential new series starter Godfall. Its technical specs are impressive too, from its SSD drive leading to significantly faster load times to the controller’s “haptic feedback experience” providing more immersive sensations.

Naturally demand for the console is high,with both the PlayStation 5 and its cheaper digital edition being snapped up on pre-order from most retailers. More stock will be available on launch day and on the run-up to Christmas but for those looking to buy, it’s a safer bet to buy online than trying to buy in the shops . Physical PS5 consoles are launching at €499.99, while digital consoles are available from €399.99. currys.ie

For those who miss the old days of jotting things down in a notebook, the Moleskine Smart Writing Set Ellipse could be the solution. This allows users to write notes on real paper that is synced to a phone or tablet in real time. The smart pen not only copies and digitises the writing from the Paper Tablet, it uses standard ink refills too. Its app also comes with an assortment of useful features such as editing text or sending notes via email. The set itself is somewhat pricey though and once the paper is used up a new notebook has to be purchased. The smart writing set can be found at the Moleskine website from €49.00. ie.moleskine.com

Since we’re all practically surgically attached to our phones, it makes sense they’re a veritable breeding ground for germs. Everything we touch throughout the day will end up smeared on your screens, which is why the typical phone is considered way dirtier than the average toilet. Since washing an iPhone with soap is out of the question, the PhoneSoap 3 is the next best thing. This chunky gadget bathes phones with a UVC light that eliminates most bacteria in minutes and can also clean additional items such as cards, keys or earphones. The PhoneSoap 3 allows charging while in use too, and it can be found at the PhoneSoap website from €96.74. phonesoap.eu

Digital photo frames aren’t ground-breaking in terms of tech, but in the era of Covid-19, it has become more important than ever for family and friends to stay connected over distances. With that in mind, the NIX 8 Inch HD digital photo frame is a simple, relatively wallet-friendly digital frame that displays photos at 1,280 x 800 resolution. It’s easy to set up and can play slide shows and videos. The eight-inch model can be purchased from Nixplay at £69.99, although 10.1-, 13.3- and 15.6-inch frames also available. nixplay.co.uk

Since we’re all spending more time indoors at the moment, a little extra greenery wouldn’t go amiss. The Smart Garden 3 is a compact gardening kit that lets you grow plants or vegetables indoors. Its automatic LED lighting system ensures steady growth regardless of weather, and it’s ridiculously simple to step up and maintain. It comes with complimentary basil pods, though anything from coriander to tomato pods can be purchased separately. There are other, and larger, Smart Garden options available but the Smart Garden 3 is considered one of the best, and can be purchased from €99.95 at the official Click And Grow website. eu.clickandgrow.com

A good night’s sleep is more essential than it has ever been, and since we spend a good third of our lives doing it we may as well nod off in style. This Bluetooth sleep mask combines a very cosy eye mask that blocks out all light with a good-quality pair of earphones. The material stretches comfortably around noggins of all sizes, and you can fall asleep listening to the album/podcast/audiobook of your choice. It’s quite affordable at £23.99 too. amazon.co.uk

When Apple Watch’s first arrived in 2015 they were seen as something of a novelty – and an expensive one at that – but with each new iteration their usefulness has increased. The Apple Watch SE has most of the benefits of previous versions, including being able to track fitness and sleep cycles alongside checking texts and emails, but at a noticeably cheaper price than the Apple Watch 6, the other recent iteration. That means it lacks features such as the blood oxygen app or always-on display, but for newcomers the Apple Watch SE is a good place to start. The SE can be found at Apple, starting from €294.10. apple.com

The world is fuelled by coffee and tea, but it’s a uniquely soul-sapping experience to neglect a mug for 10 minutes and come back to a lukewarm beverage. The Ember Temperature Control Mug 2 is built for the more patient drinkers out there, letting them set the perfect temperate and maintain it for over an hour. The mug comes with a charging saucer and app that lets you preset temperatures for certain drinks. The downside is the cost, with Apple currently selling the 295ml mug for €118.00. That’s fairly steep for a luxury mug, but if it’s being used every day it might be worth the splurge for the sippers of the world. apple.com

On the opposite end of the spectrum from the PlayStation 5 – in every way imaginable – is the Merfinova retro game console phone case. this iPhone case comes with a Game Boy-style console loaded with more than 30 retro titles, including Super Mario Bros, Pac-Man and Contra. While this case is the definition of a novelty, it’s also quite neat and a perfect way to waste 10 minutes without draining any precious iPhone battery. It’s sold with either a black or white colour scheme and can be purchased from £21.71. amazon.co.uk

We’re all missing the pub right now, but the Fizzics DraftPour beer dispenser could help bring a little of that experience home. The concept is simple: place the beer/stout/IPA of your choice inside the dispenser and it will pour a pub-quality beverage into a glass. It’s not just for show either, as the DraftPour enhances the flavour of whatever it pours and is powered by either batteries or USB. There are some setbacks – such as needing to clean the tap if switching between drinks – but it’s a nice package that’s available from iwoot at £104.99. iwantoneofthose.com