The life of a cycling commuter: ‘I am acutely aware of the dangers’

Chris Carpenter cycles 16,000km a year on his daily cycle to and from work 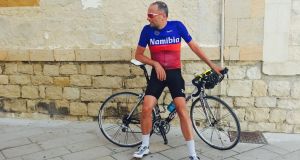 Chris Carpenter: cycles up to 400km a week, to and from work.

Chris Carpenter cycles further in a year than most people drive on their daily commute to work.

The 47-year-old leaves his home in Clane, Co Kildare every morning between 7.30am and 8am and cycles the 34km to his job as a website designer for The Irish Times in Dublin city centre, arriving at around 9am. In the evening, he leaves between 5.45pm and 5.55pm and arrives home at 7pm.

Carpenter clocks up to 16,000km a year from his daily cycling commute. That’s the equivalent of cycling around the Irish coastline five times.

The latest Census 2016 report showed that the number of people cycling to work increased by 43 per cent on 2011, the biggest increase in commuting for any form of transport.

Two thirds of the country’s cycling commuters, or 38,870 people, were in Dublin city and suburbs.

He attributes this to the “Cycle to Work” scheme that allows commuters offset the cost of a bicycle against their income tax.

Carpenter’s time in the saddle gives him “a lot of headspace”, time to think ahead about work, how to solve problems. He never listens to music; it’s too dangerous.

The greater number of cyclists has brought more risks on to the road. Carpenter has had some road-rage confrontations over the years including one with a taxi driver that involved a “999” call.

Dublin Bus and Dublin taxis are “the worst offenders” for cutting off cyclists, he says. “Their attitude is that it is their territory”. But, he concedes, it is a “two-way thing” and cyclists have become more aggressive too as it becomes a popular sport with big groups going out on the roads.

“I am acutely aware of the dangers. It drives me crazy seeing other cyclists breaking red lights and it is predominantly people on Dublin Bikes,” he said.

“It is just being really aware of your surroundings. Because I have done it for so long, I know where the danger spots are and look out for traffic.”

The health benefits are an added bonus.

“I can eat as much as I like. Weight has never been a problem for me,” he says. “I sleep really well. I am a good deal fitter than most people. It comes with riding 400km a week.”