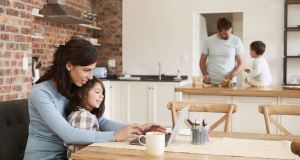 In a perfect kitchen, the perfect division of labour

Sexism and gender inequality are simmering away in Irish kitchens. The 2017 Periscope Report from Bord Bia shows that Irish women are still taking on most of the responsibility for food shopping and cooking.

The report is based on a comprehensive survey of food attitudes, shopping and cooking trends in Ireland, China, France, the Netherlands, Germany, Spain, the UK and the US. Face-to-face interviews were carried out between March and April 2017 with 8,000 adults, including 1,004 in Ireland. Irish women do most of the family cooking with only one-quarter of family meals prepared by men.

In China, Germany, Spain and the US, responsibility for meal preparation is split more or less 50/50. In France, the Netherlands, and the UK, approximately one-third of meals are cooked by men. In fact, fewer Irish men are now responsible for meal preparation than in 2013, when 29 per cent took responsibility. So, Ireland is actually going backwards when it comes to housework and gender equality.

Taking responsibility for grocery shopping and food preparation seems to have little to do with culinary expertise, attitudes to food, or personal inclination. An almost identical number of Irish men (68 per cent) as Irish women (69 per cent) can either “cook a simple dinner, for example meat and three veg” or feel “confident that they could produce a good Sunday roast with all the trimmings”.

Men in the other seven countries surveyed can cook at least as well as women or better, as in France, China, and the US. Almost the same number of men and women in seven countries find cooking “a chore – something that has to be done”.

Irish people are the exception. Just 16 per cent of Irish women find cooking a chore compared to 37 per cent of men. In all eight countries the same proportion of males and females think “cooking is important because eating well is important”.

Men are more likely to think cooking can be “good fun at times”, “love food” and have “a passion for it”.

Given such similar attitudes to food and culinary expertise, why are Irish women taking on so much responsibility for grocery shopping and cooking? Perhaps Irish men are just more skilled at avoiding household chores or too busy playing or watching sport. And does it matter?

Yes, it sure does matter. Children need role models that show that men and women are equal and that both sexes are capable of, and responsible for, household chores, including shopping and cooking.

More importantly, the more time women spend shopping and in the kitchen the less time they have to participate in other aspects of society such as in politics, education, careers, social lives, volunteering etc.

Abuse in the home is a problem in Ireland and there is convincing evidence that violence against women is more likely to happen in patriarchal families where women adopt so-called “female” roles. These gender roles are socially constructed and Irish society has decided, wrongly, that the roles of shopper, food provider, and cook are more naturally carried out by women.

Childhood obesity is a problem in all eight countries surveyed although Irish people are, strangely, less concerned about their children becoming obese than they were when surveyed in 2005 (35 per concerned in 2005; 21 per cent concerned in 2017). It seems that programmes such as Operation Transformation are having the opposite effect to what was intended by RTÉ. Children have huge pester power and can influence food shopping using emotional and persuasive tactics.  Pester power is less likely to be successful when parents share shopping and food preparation equally and are in agreement as to family nutrition.

Men are equally capable of food preparation so why don’t women let them get on with it? Perhaps women want to hold on to the power they have in the kitchen because they wield so little power in Irish society. Whatever the reason, inequality persists in Irish kitchens and inequality anywhere is bad for health.

Is there any chance that the sexism simmering away in Irish kitchens will ever reach boiling point and women will finally throw in the tea towel?