The lives of commuters: ‘The hardest part is the 5am starts’ 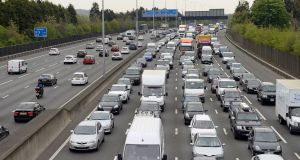 “I get up at 5am, and leave the house at 5.10am. I drive to Whitehall, and park there. I then jog about eight miles into work.” Photograph: Andrew Matthews/PA Wire

The increasing cost of living in cities is forcing more and more people to spend longer periods of time commuting.

Three people share their stories of spending many hours on the road to reach their workplaces every day.

I live in Clane, Co Kildare, but work in Cherrywood Business Park in Loughlinstown, south Co Dublin. My son’s creche is in Dún Laoghaire so I have to leave my house by 7am or 7.10am at the latest to drop him off and be back in Cherrywood to get into work for 9am.

In the evening, I have to be back down to Dún Laoghaire at 5pm. I take the M50 and M7 back to Clane, usually getting in for 7pm.

I have to do this commute as a single mum. I only earn €28,000 a year and the Government believes I’m not entitled to any assistance. Rent is so expensive I have had to go this far. It costs me €200 a month on diesel and €1,000 on rent.

I chose a creche in Dún Laoghaire as it was the best rated and as money is tight it’s €400 cheaper than the ones near my job. If he is sick, I am the only person who can collect him or rush down to pick him up.

As you can guess that leaves not much money or time for a social life. I work to give my son a good life and not rely on the dole but sometimes I do feel like I get no thanks for doing the right thing.

Our weekends are full of quality time and we love walking to our local playground and park. My little boy is my life and he is happy so I’m happy. So I guess it’s worth it but it’s getting very hard on him.

My wife is from South Armagh, just north of the Border off junction 20 on the M1. She has a large, close-knit family up here, and the cost of living is much more manageable, in terms of house prices, childcare and daily living expenses. We have three small children, aged eight, five and 20 months.

I come from Malahide so buying a house there was out of the question because of the cost. We both work in Dublin – I work in Kildare Street and my wife in East Point Business Park. We tried living in the Dublin suburbs for a few years, but the cost and the lack of any family support structures kept prompting us to consider the long commute.

In the end, it was me more than my wife who pressed to move to Northern Ireland. My wife works two days a week in Dublin, the remainder from home. I do five days in Dublin.

I get up at 5am, and leave the house at 5.10am. I drive to Whitehall, and park there. I then jog about eight miles into work (in a roundabout route) getting me to Kildare Street in time to start at 7.30am.

The hardest part of the commute is the 5am starts, and perhaps the two runs a day. The best part about it is the lifestyle and community spirit we and the kids enjoy in the North.

Time is obviously an absolute premium on long commutes, and every potential delay has to be factored in. Accordingly, given that I live in the North, Brexit could create a massive problem for the likes of me.

Since being made redundant in Kilkenny in 2013, I have gone from a five-minute cycle or 20-minute walk to work to a 90-minute commute.

Now leaving the house at 6.30am to travel 124km on the M9 and M7 to Dublin every morning, the focus is on the travel updates to see if the route ahead is free or if I need to take alternate routes to avoid the M7 chaos to get to work by 8am.

During the busy months of the year I am forced to take secondary roads as an alternative route avoiding the M7 completely in order to reach work on time.

There have been promises of extending the M7 to three lanes but unless the congestion that is currently experienced from Kingswood to the Red Cow roundabout section of the N7 is resolved then this is only going to get worse and is quickly becoming the largest carpark in Ireland.

As for public transport, this is just not a feasible option. Regardless of the cost it would increase my current journey by one hour. Adamstown train station is five minutes from my workplace but the Kilkenny-Dublin Heuston train doesn’t stop here. Students are now also forced to join the M7 chaos as they too have limited public transport options as well as limited accommodation in the country’s capital.

I have recently begun carpooling with two others also from Kilkenny so at least the burden is shared for now between the three of us. Carpooling is great for reducing costs, mileage and also allows you to have more energy when you get home for the family as you have not been concentrating on the roads for the past 90 minutes.

Arriving home just after 6pm every evening doesn’t sound that bad, but after driving the long distance the energy levels are very low. Following dinner you have about an hour with the kids before they go to bed.

My wife is from Kilkenny so we have family around us and a good quality of life here so moving is not an option, but she also had to sacrifice her career to support me and the kids with their hobbies, sports, school and other activities. With ever-increasing childminding costs, this made even more sense.

Please share your commuting story in no more than 300 words by emailing commuters@irishtimes.com, including a photograph of yourself and your phone number.