Is it the season to be jolly or does it bring out your inner Scrooge? It’s selection boxes at dawn for comedians Bernard O’Shea (Ho, Ho, Ho) and Karl Spain (Bah! Humbug) 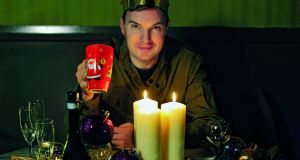 Bernard O’Shea: “The greatest gift that Christmas can give any parent: the threat of Santa Claus.”

Christmas – are you for it or agin it? Do you look forward with childlike wonder to the season of goodwill, or do you dread the arrival of sleighbells, Santa and Slade’s Christmas song? Welcome to the Great Irish Times Christmas Debate, where we decide if Christmas is the most wonderful time of the year or a tinsel-covered curse upon all our houses. On the Ho Ho Ho side is comedian Bernard O’Shea, star of Bridget & Eamon, who admits he’s a “Christmas bunny”. On the Bah! Humbug side is comedian Karl Spain, for whom “Scrooge would not be militant enough”, such is his loathing of all things Yule. We’ve managed to bring these North Polar opposites together in front of a Yule log to settle the Christmas question once and for all.

Karl: “I’ve no problem with the good spirit of Christmas, the problem is people going, ‘It’s Christmas – we must have fun, so don’t ruin it for us’.”

Karl: “When I hear stories of someone getting beaten up at Christmas, I always think, oh that’s terrible . . . wait! Were they wearing a Christmas jumper?”

The 12 pubs of Christmas

Bernard: “I really like Christmas since I stopped gigging at Christmas. Karl gigs at Christmas – that’s probably why he hates it.”

Karl: “I found out at a very early age that one of the fictitious characters of Christmas didn’t exist. So I had it in my head forever that this character is just to make us be good.”

Bernard: “Santa’s coming to our house again this year, and I can’t wait. The big benefit is that when the box of crayons comes out and they start writing on the walls, you can say to them, right, Santa Claus is not coming if you keep drawing on the walls and pulling things off the oven. And that is the greatest gift that Christmas can give any parent: the threat of Santa Claus.”

Karl: “I used to compete with my sister to buy our nephews and nieces the best presents, and she’d usually win. And then I’d get something from the children, and they’d say, ‘we made this for you’. Made it yourself, did you? Couldn’t your father give you money to buy me something?”

Bernard: “Christmas for me doesn’t start until the the queue for Jo Malone candles starts at Brown Thomas. I love the expensive thoughtfulness-less of it all.”

Bernard: “The holiday box of USA assorted biscuits and the smell of Marietta – that’s Christmas.”

Karl: “Breaking through to that second layer in the box of Milk Tray – it was like seeing your first boob. You’re sitting on the couch and it’s just one Rose after another – it’s like Christmas with Dáithí Ó Sé.”

Bernard: “Putting the wrappers back in the box

– was it Kim Jong-un who killed his half-brother? That’s what happens when you put the wrappers back in the box in North Korea.”

Bernard: “The only thing I would smack Christmas on the wrist for is it starts before Halloween. Anything that comes too soon ruins everything for everybody.”

Bernard: “I could listen to Fairytale of New York 24/7. I could happily listen to Driving Home For Christmas while stuck in a traffic jam at Christmas.”

Bernard: “The one thing I think is really amazing about Christmas is that even though we’ve got Netflix and we can watch whatever we like whenever we want to, people will still sit around the television and watch Willy Wonka & the Chocolate Factory. Or the Bridget & Eamon Christmas Special. We watch the Late Late Toy Show right into March. I love sitting down and watching the Toy Show – there’s so much analysis about it online, even in the paper of record, and that’s very Irish.”

Karl: “The best thing about Christmas is that Barry’s tea ad, where the guy gets the train set. ‘Doesn’t that beat Banagher? Isn’t Santa the smart fella?’ I got stuck in traffic one day and that came on the radio, and I remember going, now that’s Christmas.”

Karl: “This year I’ll be lean and mean because I’m doing panto – it’s Beauty and the Beast. That’ll keep me slim. For the last few years, I’ve gone to Dubai for a week just after Christmas. And coming back from Dubai is where you feel bloated.”

Bernard: “I’m going to try to lose some weight before Christmas, because I will just pig out and not exercise. But I won’t go swimming on Christmas Day – that’s just bonkers.”

Karl: And after Christmas, Bernard and I will be doing our show, Fat Chancers.”

Bernard: “You can buy your loved ones Fat Chancers tickets for Christmas.”

So, at the end of our Christmas debate, It looks like Bernard has won the tinsel trophy, but Karl is happy to concede defeat and surrender to the Christmas cheer.

Karl: “Christmas killed George Michael – I’m not going to take it on.”

Summer drought, winter floods? These plants will survive it all
9