‘Bono and Ali are very good at having fun. I can barely keep up’

Dublin singer Imelda May on her marriage break-up, a new look and a searingly honest album 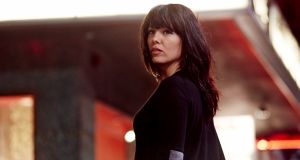 I loved the pin-up girl thing, but I was so boxed in. It’s nice to have shed that, especially as you get older – it’s unhealthy to stay the same.”

It’s apt that Imelda May rang in 2017 by unveiling her new shaggy-haired image on her good friend Jools Holland’s BBC show, Hootenanny. In the months that followed, her new direction was revealed in full, centred around Life Love Flesh Blood, an album so searingly candid it felt like an intrusion just to hear it.

Released in April, it documented the dissolution of her marriage with fellow musician Darrel Higham, and the highs, lows and end of the relationship that followed; certainly, a break-up album of the most classic kind.

Of course, such honesty involved the unenviable task of bringing her private life into the public sphere, at the same time as shedding her rockabilly roots and introducing her diehard fans to an updated version of herself, free of her trademark kiss-curl, blood-red lipstick and outfits so tight they’d give Sandy from Grease a run for her money.

But better still, in its place was an unfussy version of Imelda: stylish, sultry, and you’d imagine it took a lot less time to get ready in the morning.

“I loved the pin-up girl thing, but I was so boxed in,” she reflects, as we speak to her on an autumnal October afternoon. “It’s nice to have shed that, especially as you get older – it’s unhealthy to stay the same. Now I’m having loads of fun, I can wear what I like without thinking too deeply, and even musically everything is open to me. I have no idea what my next album is going to sound like, which is the adventure of it. It’s liberating.”

I fully expected to lose the people who wanted me to do the same thing, but I can’t write the same album for the rest of my life

The reinvention was well-received by existing fans and earned her a few more, especially after singing at two of 2017’s sporting highlights: the Mayweather vs McGregor fight and the All-Ireland Final. But inevitably, there was a contingent of longstanding fans that preferred the version of May they knew and loved.

“They’d let me know online – people let you know everything online, which is why I mostly keep off it,” she says. “I fully expected to lose the people who wanted me to do the same thing, but I can’t write the same album for the rest of my life. It’s not healthy as a human or an artist to be constricted. You just have to be brave and follow your path, regardless of the end result.”

More meaningful messages came from those who were inspired by her strength, especially as her divorce wasn’t caused by negative feeling towards Darrel, but a need to live her best life: “Sometimes you get to a point in your life when . . . it’s not you have to do something, it’s that you can’t not do anything. If that makes sense,” she explains.

I ask how she felt about becoming a role model for those in similar situations, and her horror at the term is evident.

“No no no!” she cries. “Please don’t make me anyone’s role model. I’m a very flawed human being like anybody else. I’m happy if someone takes inspiration from me, but if you put yourself up there, there’s a lot of pressure – and someone to take you down.”

Wise words indeed, which speak plenty of her Liberties upbringing, though she now lives in the English countryside in Hampshire with her five-year-old daughter Violet, and Darrel nearby for daddy duties.

It sounds like an idyllic life, but she’s quick to explain that her day-to-day schedule isn’t as slow-paced as the move suggest.

“I don’t get much time for myself between work and being a single mammy,” she says. “I go for short runs three times a week, and that seems to clear my head. And if I get half an hour with telly and a cup of tea at the end of the day, I’m delighted with myself.

“I live where it feels right, but the reality is that I’m going to lots of different places all the time, so location isn’t as important as it might be.”

Recent travels include watching U2’s Joshua Tree tour in New York and Dublin, at the behest of another good friend, Bono (“him and Ali are very good at having fun. I can barely keep up with them”). And she’s currently out on a two-month tour which culminates in three dates in Ireland.

“When I last toured, the album had just come out and a lot of people bought the album after the gig, so I’m looking forward to this because people coming will recognise the songs,” she says. “I can see which ones people have taken to, and it won’t be as tentative.”

Another change is that Darrel, also her former guitarist, won’t appear in her backing band, a decision made during the touring cycle for 2014’s Tribal.

“He’d been wanting to leave the band for a long time before we split up so we both knew that it was on the cards,” she explains. “He wanted to make his own album, which I highly encouraged. It was never a forever.”

If you burn the turkey or ruin the dinner, it doesn’t matter. It’s important to spend it with your family and friends

Given the hometown show rounds off the tour ahead of Christmas, does she plan on staying in Ireland for the big day?

“We haven’t decided yet, but it will either be a gang coming to me, or me coming to a gang,” she explains. “I’ll have the same Christmas as everyone else – I’ll see as much family as I can and eat as much food as I can in a short space of time. It’s a magical time, I love Christmas. There’s always so much to do, it feels like my head’s going to explode, especially as I’m always on tour while trying to organise it. But when the day comes around, it’s amazing.

“If you burn the turkey or ruin the dinner, it doesn’t matter. It’s important to spend it with your family and friends – and remember those who aren’t there, because Christmas brings a lot of pain with it too. It’s the more reason to stick together.”

She pauses, before adding a final thought: “Although Nigella Lawson said the best ingredient at Christmas is to invite a stranger to dinner, because that means everyone’s on their best behaviour. So maybe we’ll find a stranger to come for dinner too.”

Your annual guide to the best toys, fashion, travel, food and drink for the season