Get your skates on: the best ice rinks at home and abroad 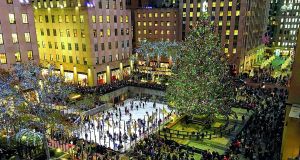 The skating rink at the Rockefeller Center in New York. Photograph: iStock

This year, ice-skating returns to Galway with a 600sq m ice rink in a 1,080sq m all-weather marquee in the grounds of Leisureland at Salthill. It runs until January 8th, 2018, from 1.30pm until 9pm weekdays and 10.30am-9pm at weekends. Adults ticket prices are €15 and children €13. galwayskates.com

Cork on Ice has become a winter tradition for many in the city and greater Munster area. Operating at Mahon Point Shopping Centre, it has a large main rink, a separate kiddies’ rink and a variety of events throughout the season. It runs until January 28th, 2018, and costs €9 for adults and children. iceskating.ie/book-now/venue/cork-on-ice/

Winter is coming and with it the Winterval carnival and Winterval on Ice in Waterford. The special magic of Christmas will be at a bigger and better location at Broad Street. It runs until January 14th, 2018. Early bird tickets are from €9 and sell out quickly so book early. Normal prices for adults are €18 and €17 for children, with some discounts for off peak. winterval.ie

The Killarney on Ice rink will be at Beech Road car park and under a marquee, so no need to worry about the Kerry weather. It runs from December 1st until January 7th, 2018. Prices are from €15 for adults and €13 for children, family off-peak tickets are €38 for four. killarneyonice.com

The Trocadéro Ice Rink in Jardins de Trocadéro is free to use, you just pay for skate hire, €7-€10. There is a fun Christmas Village at the Trocadéro and stunning views of the Eiffel Tower. The market and ice rink opens in mid-December until early January from 11am- 11pm.

They take ice skating seriously in Vienna and there will be skating areas all around the city. In mid-November, when the Christkindlmarkt opens, there is small ice area in the Rathauspark. The big Vienna Ice World operates from January to March at the Rathausplatz (Town Hall place). The background is the beautiful illuminated town hall. It is opens every day from 9am to 10pm. Prices are from €7.50. Skates are available to rent for €7 and all are pre-heated.

London has really taken to ice skating at Christmas and there are a number of stunning places to skate. Somerset House, a neo-classical building, is the backdrop for some great skating. Glide on one of London’s beautiful outdoor ice rinks from now until January 14th, 2018. Prices are £8.90 (€9.90) for adults and children.