Meet the Irishwoman predicting TV trends for the BBC 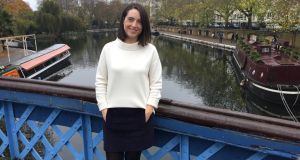 Alice Ryan: ‘It takes effort to make living in London worth it... it is worth trying to make it work because there are incredible career opportunities over here.’

Working Abroad Q&A: Alice Ryan is head of insight and planning for global television brands at BBC Worldwide in London, where she is responsible for analysing what audiences like about their programming, and predicting what the next big hit will be. She shares her career path with Irish Times Abroad.

Where did you grow up?

I grew up in Ranelagh in Dublin. It’s very trendy now but when I was young it was more of a village with newsagents, butchers and video shops. I spent a lot of time in the video shops. I rented Grease so many times the man in Laser lent it to me for free. I’ve always loved film and TV but I had no idea how to go about getting a job in the industry. It didn’t seem realistic.

I had a brilliant economics teacher, Mr Culleton, and he inspired me to do Business and French in Trinity and then a master’s at the London School of Economics. It turned out to be really valuable because later in my career I found that creative industries were crying out for people with business and economics backgrounds.

I think it is really valuable to bring a different way of thinking to an industry. When you need to solve a problem, instead of having a room full of people who have been identically trained, it is fantastic to be part of a team full of Ancient Greek and Sports Science graduates who all approach things differently. Businesses in the UK seem to get that; career paths over here in London seem a lot less linear than at home.

When did you first move abroad?

When I was 20 a gang of us went on a J-1 summer visa to California. I worked in a bikini shop, slept on an inflatable lilo and ate tomato soup for three months. It was great fun. Straight off the back of that I moved to Paris to do my Erasmus. Four of us squeezed into a tiny apartment and took turns sleeping on the couch. My husband Brian actually lived in Paris that year too but our paths didn’t cross until we met later in London.

After completing my final year at Trinity I moved to London to do my masters at LSE. At first, I found the scale of London really daunting. A lot of friends had moved over after college but depending on where they lived, it could take an hour to get to them. I would find myself sitting on the tube for half the weekend wondering if it was worth it.

I think it takes effort to make living in London worth it. You have to make plans to see friends far in advance. Avoid Oxford Circus at rush hour. Take advantage of the city’s great parks. We live near the canal so I walk there a lot. It is worth trying to make it work because there are incredible career opportunities over here. Also there is little to no age bias; If you are good and can do the job, you can rise fast.

How did you get the job with BBC Worldwide?

While working in book publishing, I became really interested in insight. People usually go blank when I mention insight! But essentially it is about spotting a gem of information about an audience or trend that will transform how you do things.

I organised a panel on how insight can benefit creative industries, and one of the speakers saw my enthusiasm for the subject and asked me to interview for a job at BBC Worldwide.

Tell us about your role and what it involves.

I am head of insight and planning for global television brands at BBC Worldwide. BBC Worldwide is the global arm of the BBC. Its purpose is to build the BBC’s brands, audiences, commercial returns and reputation across the world. I’ve been at BBCW for nearly three years now.

On a week-by-week basis that means using multiple sources to answer questions like: what do younger audiences want from content and what will they want in one, three, five years? How will behaviour shift and what does it mean for our content? What are the greatest opportunities to break into the Chinese market?

This time last year the question was, how can we ensure David Attenborough’s Blue Planet II appeals to as many people as possible? This October the first episode of the series was the highest rated consolidated TV programme of 2017 in the UK. So that’s one win!

What excites you about your job?

I love a good twist and audiences are always providing them. The US election in 2016 was the starkest example of this. Who could have predicted that the biggest TV hit of last year would be a sci-fi drama set in the 1980s following a group of kids on bikes who discover a dystopian upside-down in Stranger Things?

But audiences don’t care what genre a show fits into, they don’t care what age the protagonists are or what decade it is set in. They just care that the writing is smart, the plot gripping and that the characters jump off the screen and live in your head. The best shot at getting all these things right is fuelling incredible creative talent with powerful insights. It is great to get to straddle creative and commercial worlds.

I would like to end up in Ireland eventually. But I love what I do, and I don’t know how big a role insight and planning plays in the film and TV world in Ireland. Here’s hoping it’s a growing field.

If you work in an interesting job overseas and would like to share your experiences, email abroad@irishtimes.com with a little information about yourself and what you do.