House on Park Avenue house is on market after buying Riverdance duo’s Howth home for €8.2m 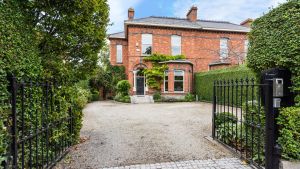 The two locations couldn’t be more contrasting. Danes Hollow is a newly built 9,000sq ft property on 3.35 acres of private grounds on one of the capital’s best coastal stretches beside Baily Lighthouse with panoramic sea views across Dublin Bay to Bray Head. 78 Park Avenue is a substantial semi-detached townhouse on a tidy 0.2-acre site along one of Dublin’s leafiest suburban thoroughfares in the genteel surrounds of Sandymount village. Joint agents Kevin Flanagan and Savills are seeking offers “in the region of €3.8 million”.

The Aikens took up residence at their new home shortly after the Danes Hollow deal closed this summer. Since then the 369sq m (3,978sq ft) Sandymount property has been quietly for sale, and it’s understood to have been seeking offers initially of around €4 million.

Their family home for 24 years, the Aikens undertook a substantial refurbishment and rewired, replumbed and partially re-roofed the property in 2000. The result marries the carefully retained period features of the original house with a modern open-plan American style living space to the rear.

The design and decor were overseen by Mary Aiken, who, when not conducting domestic refurbs is a doctor of forensic cyber-psychology, and director of the Cyber-Psychology Research Centre at the Royal College of Surgeons. An expert on virtual criminality Aiken has worked with Europol and Interpol on cybercrime, and her work with the White House on human-trafficking inspired hit US television show, CSI: Cyber, starring Patricia Arquette as Aiken. Most recently Aiken authored The Cyber Effect, a book exploring young people’s relationship with technology and the internet.

There is an international influence to the design finish at the Aiken’s Sandymount home, reflecting perhaps its owners’ wide and varied international encounters in entertainment and television circles. While the promotional brochure for the property carries images of a lavishly furnished house, the property is currently empty of furniture apart from soft furnishings and light fittings included in the sale. Though a little bleak it’s still apparent that a lot of money was invested in the best of materials for the property’s upgrade and upkeep.

In particular there is a strong Italian influence from the travertine limestone-tiled floors connecting the two main receptions at the front of the house – a striking departure from the usual wood flooring – to the Ulf Moritz wallpaper featuring crystal glass motifs, to custom-designed Italian walnut sliding wardrobes and Versace tiles in the main bedroom suite.

At the rear of the house the sweeping kitchen, dining, living area features high ceilings and exposed beams. Hardwood floors, a solid oak kitchen and horizontal iroko wood windows lend a Japanese influence complemented by a Japanese courtyard garden. Off the kitchen is a “kids pod” or den, tucked behind a curved glass brick wall, and beyond again in the original house, is a study nicely finished with bespoke oak bookcases.

Off the first landing is an impressive main bedroom suite covering the same footprint as the added living/kitchen area below. Comprising a bedroom, en suite and roomy dressing room/lounge area opening out to a Juliet balcony overlooking the rear garden the influence throughout is strongly Japanese. Silk Jim Thompson curtains on an electric rail separate the bedroom and lounge spaces, and each area sits on an oasis of green carpet inset to the hardwood floor.

On the top floor are four further bedrooms, three with en suites. One is a large double while the others are less roomy, though extensive built-in wardrobes address storage concerns.

No 78 is a fine family proposition that’s ready to go for the next buyer. The distinctive dark wood finish throughout may not have universal appeal, and new onwers might want to reinstate the original fireplace in the front receptions currently obscured behind a stud wall bearing a flatscreen television. The house is set well back from the road behind electric gates with off-street parking in the gravelled front garden for several cars.

There has been a bit of movement on Park Avenue in recent times, with Sherry FitzGerald selling No 69 in recent weeks. Situated on the opposite side of the road to No 78, the semi-detached property sits on 0.6 of an acre and has a west-facing garden running down to the Dart line. On the market for €3.9million it is believed to have sold for around €3.7million.

The same agent also sold No 76 next door in April this year for €3.128million according to the Property Price Register. It came on the market in February seeking €3.15million.

Directly across the road from No 78 is No 81, which has been on the market for €4.6million through Lisney since July. The former 320sq m (3,400sq ft) home of the late senator Eoin Ryan, it is one of a small row of four detached Edwardians and sits on a very substantial 0.7 acre site with a vast west-facing rear garden running all the way down to the Dart line.

Takeaway kebab at home: this chicken shish is delish
6