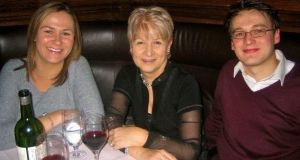 Yvonne Mathers from Waringstown, Co Down, with her children Joanne and Michael.

Yvonne Mathers (nee Patterson) was born in the village of Waringstown in Co Down on January 28th, 1950. She spent her days playing in the fields with her sister Liz without a care in the world.

Thomas, her father, was a repairman, while her mother Violet baked “as long as mum and her sister were not under her feet”, says Yvonne’s daughter Joanne.

Yvonne’s parents, both of whom have passed away, always encouraged her to do the 11 plus, which she did. She was a student at Portadown College until 1968 and spent a year in Trinity College Dublin where she studied English for a year. She was at Stranmillis University College in 1970 where she began her teaching course amid the dark days of the Troubles, including “Bloody Friday” when the IRA planted and exploded 22 bombs which, in the space of 75 minutes, killed nine people and seriously injured about 130 others.

From 1974-1987, Mathers taught at Drumgor Primary School in Craigavon, Co Armagh, a new school at the time built in a housing estate with a lot of deprivation and many children of serving soldiers in attendance. While there she also taught Vietnamese children. “It was a great school with great teachers and mum talked fondly of her time there,” says Joanne.

Moving to Co Fermanagh, she was a popular teacher at Jones Memorial Primary School between 1987 and 1998 and later became deputy principal before receiving a master’s degree in education in 1999. She worked for the Western Education and Library Board until her retirement in 2014.

As well as Joanne, she had a son, Michael. Along with being a loving mother to them and sister to Liz and Jeremy, her younger brother, she was also a devoted grandmother to Ella, Matilda and Ottilie.

Sadly last month Joanne had a choice to make as her mother lay in South West Acute Hospital in Enniskillen with Covid-19: hear her distinctive voice on the telephone, possibly for the last time, or let her go on a mechanical ventilator without saying a word in the hope that each breath she took would help rid her of coronavirus.

She chose the latter, dreaming that her “formidable mother” would overcome the disease so she could get back to doing what she loved most; spending time with her family.

She didn’t. The teacher who inspired a generation of children died on April 9th. She was 70.