Lives Lost to Covid-19: He never travelled, and never married, but was happy with life 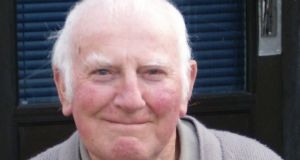 Bernard (Ben) Tormey was a gentle, kind-hearted and generous man who lived a simple and uncomplicated life and was loved by his siblings, nieces and nephews.

Born into a family of nine children in August 1934, Ben grew up on Coburg Place off Seville Place in Dublin. He left school aged 14 shortly after his father’s death and followed in his older brother’s footsteps to work in the Dublin railways – a job he would remain in for 40 years.

“I believe he was very good at school but back then you went out to work at the first opportunity you got so you could contribute to the family,” says his niece Natalie Dineen. “It was a large family and they wouldn’t have had much, they just got on with it. He would have kicked ball with his friends on the street and went to dances on a Saturday night. He wasn’t a big dancer but his sisters made him go.”

Ben loved to read and was particularly interested in American history. “He never travelled and never had a passport but he was always fascinated with American music and artists.”

Ben never married and lived with his sister Kathleen (also single) and mother in their flat on Dunne Street before moving to Raheny later in life. His niece recalls how he sometimes mentioned a woman he loved during his youth. “I remember him saying, ‘someday I’ll tell you, she was the love of my life.’ But he never really spoke about it, he was a very private man.”

Ben remained close with his brother Tony, Natalie’s father, throughout his life and the pair often visited Kealy’s pub in Swords for a pint. They also loved drinking in the Lady Belle pub in Dungarvan, Co Waterford during family holidays.

“He would have been over to our house every other week and always had a pint of Guinness in his hand enjoying the banter and the craic. He’d also throw you a few bob, he always had money in his pocket for the kids.”

After he moved to Raheny, Ben enjoyed taking walks in St Anne’s Park, where he often sat in the rose garden and chatted to passersby. He continued to live with his sister Kathleen but struggled to look after himself after she died five years ago.

He quickly settled into the Tara Winthrop nursing home when he moved there two years ago. “The only reason he went to Tara Winthrop was because he was diabetic and couldn’t look after himself anymore. He had been lonely but they looked after him so well in the centre, the people there were amazing.”

Ben loved his family, reading his books, taking walks and a few pints of Guinness, says Natalie. “I always thought he missed out on travelling but I don’t think he thought of it that way; he just enjoyed the simple life. He was a such a generous, kind-hearted soul.”