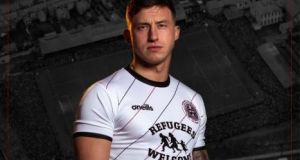 Refugees Welcome: Bohemian FC’s 2020 away jersey also features a silhouette of a fleeing family and the slogan “Love Football, Hate Racism” on the collar

Bohemian Football Club’s new away strip features the slogan “Refugees Welcome” emblazoned across its jerseys after the Dublin soccer team partnered with Amnesty International to campaign for an end to direct provision. The jersey also features a silhouette of a fleeing family and the slogan “Love Football, Hate Racism” on the collar.

The O’Neills strip, which went on sale in the club shop today, marks the 20th anniversary of direct provision, the system that provides asylum seekers with food, shelter and, since increases in last year’s budget, a personal allowance of €38.80 a week per adult and €29.80 a week per child.

❤️It is with great delight that the Bohemian Football Club, made possible by @DesKellyIE, unveil our 2020 @ONeills1918 away jersey, a partnership with @AmnestyIreland

Full launch at 11am

Although direct provision was intended as an interim measure, accommodating people for no more than six months, asylum seekers spend an average of 23 months in the system, at one of 39 functioning accommodation centres. Some of the 60,000 people to have used direct provision have spent more than seven years in it. The system has been widely criticised for trapping people without access to work permits or free education and for isolating them for the wider community.

“We made the decision to allow our shirt to be used as a platform, alongside Amnesty International, to highlight a very real and pressing issue in Ireland today,” says Daniel Lambert, a club director. “Football is a universal language, and it can be a vehicle for great good in our society.”

Colm O’Gorman, the executive director of Amnesty International Ireland, says the club and its supporters have an “incredible track record on social-justice issues” and hopes the jerseys will bring supporters together “to call for an end to direct provision”, which he describes as “an ongoing human-rights scandal. The system is fundamentally flawed, trapping people for years in limbo and isolating them from communities in inhumane, institutionalised conditions.”