Why did the atheist go to Mass? 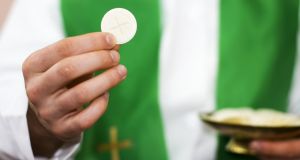 The relatively charitable and sincere ambience surrounding Mass can be a tonic – even for non-believers.

What are we to make of surveys showing that many Christians do not accept basic tenets of the Christian faith?

A recent YouGov poll found just 16 per cent of British Christians accept the “creation myth” – that God created man in a human likeness.

A few years ago, an Irish Times/Ipsos MRBI survey found almost two-thirds of Irish Catholics believed the bread and wine which was blessed during Mass “only represents the body and blood” of Christ, thereby denying a cornerstone of faith over which millions of people were killed during religious wars down the centuries.

Atheists tend to react to these contradictions with mirth but, as an atheist myself, I wonder whether it would be more fruitful to question underlying assumptions we have about religious practice. The Catholic Creed, for example, contains a vow of loyalty to the “one, holy, Catholic and Apostolic Church”. But how many Catholics attending Mass really believe the Vatican has exclusive access to the truth?

Growing up as a Catholic in Ireland, one becomes acutely aware that many Christians develop their faith in spite of the Church rather than because of it.

As Fr Shay Cullen, the Manila-based child rights campaigner, once told me: “My faith is in Jesus of Nazareth. I don’t have faith in an institution . . . That is not authentic faith.”

One feature of religion which atheists might do better to try to understand is the appeal of ritual. In a fast-changing world, where human values are in flux, religious habits can act as an anchor. I find belief in God untenable, given the evidence, but I do occasionally go to Mass. Even though I’m more of a spectator than a participant, I unfailingly leave the church in a more peaceful condition, calmed and reoriented towards what really matters.

Yes, the institution is scurrilous but what unfolds in your average parish church on a Sunday has as much to do with the Roman Curia as an U- 9s football fixture has to do with Fifa. How can Mass appeal to an atheist? Let me count the ways:

1. The Penitential Act: Sin is out of fashion these days, and for exactly that reason the act of contrition that opens Mass is utterly refreshing.

What I like about this is you’re taking responsibility for yourself; you’re not pointing the finger elsewhere. That’s subversive in an age of sharp and highly-judgmental public debate.

In popular literature, Catholic guilt gets a bad rap but we all know people who are morally hard on themselves, and we know people who refuse to see their own faults. I know which company I prefer. (I’m with Roger Scruton when he says “good people blame themselves more severely than others would”.)

2. The sermon: There is something incredibly grounded about a parish priest, who has spent time with people at their most vulnerable, trying to make sense of sorrow and despair. Yes, the lack of women priests is jarring, and it starves Mass of a more rounded perspective. But when a priest gets up to speak there’s usually some wisdom amid the otherworldly sentiment.

I think, for example, of the priest at a funeral Mass I attended recently (a friend’s mother had died) who described how people always ask the same two questions when they hear of a death – “How old was she?” and “Was she sick long?” – when in truth, the priest continued, “the questions that really matter are: Was she loved? Did she love? Is she loved?”

3. The Golden Rule: Christians can’t claim exclusivity on the moral principle: “Do onto other as you would wish done onto you”. Versions of the Golden Rule can be found in all world religions and it underpins humanist thinking on equality and social justice. But there is something particularly admirable about the Christian command to love your neighbour – and not just tolerate them. As for loving your enemies, what an un-Trumpian idea!

In What I Believe, the atheist philosopher and scientist Bertrand Russell describes love and knowledge as twin goals for human beings. “Neither love without knowledge, nor knowledge without love can produce a good life.”

On the matter of love, Christianity might not have all the answers but it asks the right questions, like: How can I learn to love more? And how can we show love to those who wake up each morning feeling unloved?

4. Attention to virtue: Christianity borrowed heavily down the ages from Greek philosophy, especially Aristotle. Hence, there is a good dollop of virtue theory at its heart. Virtue theory emphasises the role of human character in morality and stands opposed to the two other great schools of moral philosophy: the rule-based approach of deontology, and the semi-mathematical stance of utilitarianism.

The first of these is highly problematic in that it demands fixed rules in an age where ethical truths are seen as culturally and historically contingent. The second – with its maxim of “the greatest happiness of the greatest number” – is much loved by bureaucrats and economists, which is ample reason to make one shudder.

People tend to use a combination of all three when considering moral issues. We apply rules (e.g. It’s wrong to steal); we make calculations based on utility (e.g. Let’s do X because the benefits outweigh the costs), and we judge character (e.g. Courage is admired and greed broadly condemned). All three approaches have their merits but it seems to me you’re missing a large part of the picture if you ignore the last of them.

5. Prayer: If secular humanists could steal one thing from the religious it should be prayer. Not prayer in the sense of asking God, out of self-interest, for “the laws of the universe to be annulled” (to paraphrase the US wit Ambrose Pierce). Rather prayer in the sense of supporting what William James called “the will to believe”. Prayer has the effect of reinforcing and hardening ideas so that they become truths – truths that we can act upon.

A lot of Christian prayers are about gratitude. Take grace before meals, the attraction of which is not lost on the American biochemist Leon Kass.

“A blessing offered over the meal still fosters a fitting attitude toward the world, whose gracious bounty is available to us, and not because we merit it,” he writes. “Wolfing down food dishonours both the human effort to prepare it, and the lives of those plants and animals sacrificed on our behalf.”

The “Our Father”, or “Lord’s Prayer”, at Mass contains a similar plea for perspective, the key line being: “Forgive us our trespasses as we forgive those who trespass against us”. Asking for forgiveness aloud in a room full of other people is cathartic. Forgiveness is such a key virtue for one’s mental health, and indeed for the health of society. Each step of civilisation – each rebirth after trauma or war – has been marked by forgiveness.

6. Silence: Mass is like a mini-retreat from the world that sharpens into focus during the “Prayer after Communion”. I imagine quite a few people use this time for silent reflection to think of, or wish goodwill towards, loved ones living and dead.

I typically use the silence to “talk” to my late father, continuing a tradition of humans “communicating” with their ancestors stretching back millennia. Whether they can hear us is beyond the point. Through this rite, we are reconnecting in an important way with the cycle of life.

In this short list, I haven’t even mentioned the music (think of the Palestrina Choir), the readings (which can be at once educational and objectionable) or the sign of peace (what’s not to like about wishing a stranger spiritual wellbeing – and in the flesh – in this atomised, snarky, digital age?)

It must be said there are other ways for an atheist humanist to get what the church has to offer. If you spent an hour doing voluntary work or reading the Stoics you might well be better off. But exposing yourself to different perspectives is healthy and, at a time of heightened cynicism and intellectual segregation, the relatively charitable and sincere ambience surrounding Mass is a tonic.

Viewed from the pews, those around me seem less like worshippers of unreason and more like fellow travellers – people with the same doubts and anxieties, trying to be the best versions of themselves.