Waiting for asylum: ‘I felt like a shadow that was slowly disappearing’ 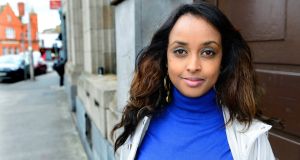 When Hermon Tsegay’s family moved to Eritrea in the late 1990s, the teenager hoped to avoid being drafted into the nation’s military service. However, within a year of arriving in the city of Asmara it was clear that military obligations were unavoidable.

“I remember there were a few days in PE class when we had military training. They’d even keep us after school to do extra training. Then it reached the point when it became mandatory to serve in the national service for all men and women above 18.”

Tsegay spent the first 16 years of her life in Addis Ababa in Ethiopia, where her father ran a plastics factory. However, when war broke out in 1998 between Ethiopia and neighbouring Eritrea, he was deported back to his home country. A year later Tsegay, her mother and siblings followed.

The Eritrean government claimed that military service, which was introduced in 1995 as part of the country’s reconstruction effort after 30 years of war, would last only 18 months. However, it became increasingly apparent to Tsegay and her family that many of the young people being sent to training camps were not coming back.

“You would hear stories that men could do whatever they wanted to women once you were there. These were military men who fought against the Ethiopian regime and were completely detached from real society. It was dangerous; nobody would choose to go there.”

Many women opted to get married as soon as they turned 18 rather than face conscription. The only way for men to avoid service was to flee the country. Many young Eritreans embarked on the perilous journey across the Sahara desert followed by the equally hazardous odyssey across the Mediterranean to Europe. Thousands continue to make this same journey with an estimated 3,027 Eritreans crossing the Mediterranean so far this year.

Tsegay’s father, who had considerable savings from his plastics business, paid for his older children to study abroad so they could avoid joining their peers in rural training camps. Because of her youthful looks, Tsegay managed to avoid immediate conscription after graduation and found work at a local international school. However, she knew it was only a matter of time before she was spotted.

Tsegay decided to follow her brother and sister to Uganda, where they both worked, and, after completing a course in teacher training, found a job at a school teaching history and art. There she met a young Irish teacher named Gemma and was introduced to another Irish teacher who was recruiting for a school in Libya. Attracted by the promise of higher salaries at the school in Tripoli, the pair applied for jobs, and in 2010 they moved to North Africa.

“It was peaceful then although it wasn’t the ideal place for a woman. We never covered when we lived there – we didn’t want to – but we did get hassle. If I was going to the shop I’d ask one of the male teachers to come with me. We were all focused on the income and having savings.”

Less than a year after arriving in Libya, violent protests broke out in February 2011, as a wave of unrest swept across the Arab world. Tsegay and others from the school, many of them Irish, took shelter in the home of a Libyan friend before making their way to the airport to find a flight out of the country. There they convinced a German pilot to let them board a flight to Istanbul. Once in Turkey, Tsegay’s Irish friends helped arrange a tourist visa with the Irish Embassy so she could travel on to Ireland.

“I had no knowledge of how visas worked or what would happen. I was naive and waited until the third month to ask what I needed to do. To this day they can’t send people back to Eritrea, so that made me a refugee.”

“I come from an unsafe country where there’s a dictatorship with human rights violations but I didn’t see myself as a refugee. I was just living life like any other twentysomething-year-old girl who loves travel and meeting friends.”

With the help of an immigration lawyer, she applied for asylum in Ireland and stayed with friends while she waited for an answer. However, eight months later she was informed that her application had been rejected. She appealed the decision but knew she could no longer rely on friends for accommodation. Faced with the prospect of ending up in a direct provision centre, she turned to her sister, who works with the UN in the United States, for advice.

“She said, ‘We’re going to organise between myself and your brother to pay for you to go to college’. So I went to the American College, which was very expensive, and she also paid for my rent. She’s the oldest and would starve to look after her family.”

Tsegay spent the following three years waiting for a response to her asylum appeal. “I felt like a shadow that was slowly disappearing. I’d walk the streets and I knew I was different. Every person on the street had an identity but I didn’t have my passport. I couldn’t open a bank account and I couldn’t secure a job.”

In December 2014, nearly four years after arriving in Ireland, Tsegay received a letter confirming her application had been accepted. “I didn’t celebrate. I felt like I was entitled to live peacefully in any country as long as I didn’t commit a crime. All I was asking was to be a normal person who gives back to society. I shouldn’t need to be from a certain country to be validated as a human being with basic rights. But it turns out the world doesn’t work that way.”

She now has a full-time job with a fundraising agency and lives with her partner in Dublin. She’s happy to be in Ireland but still feels a sense of bitterness about the four years she spent waiting for an answer.

“My pride was definitely damaged, it changed me forever. I’m less naive about how the world works. I think it was about understanding reality. It was a heartbreaking time but my life here now is peaceful and I’m happy. I love how free I am, that I can make decisions and everything’s on my doorstep.”