‘I came to Ireland to save my family. Why is it taking so long?’

New to the Parish: Norbert Nkengurutse arrived from Burundi in 2016 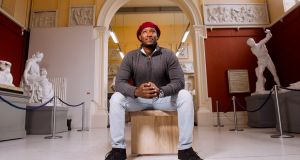 Norbert Nkengurutse in the Crawford Gallery, Cork. “Direct provision is not a bad system but it’s a poorly organised system.” Photograph: Daragh McSweeney/Provision

When Norbert Nkengurutse arrived in Ireland seeking asylum he hoped his wife and children would be able to follow him without delay. Given the violence and political unrest in his home country of Burundi, which has seen nearly 400,000 people flee to nearby countries since 2015, Nkengurutse believed the Irish Government would accept his application without hesitation. However, more than 2½ years later he is still waiting for a decision.

“My application hasn’t been refused but I almost feel the same as someone who has been refused at this point. It feels like I’m taking a step backwards. Before coming here I had a family; I had my wife and children. I had responsibilities in our home. Now I’m living in direct provision where you don’t have the right to be your own person, you can’t eat what you want and you’re treated like a child.”

The 36-year-old electro-mechanical engineer arrived in Ireland in 2016, a year after Burundi’s president Pierre Nkurunziza’s decision to seek a third term in office led to violent clashes across the country. As a teenager, Nkengurutse had already witnessed the bloodshed of the 1993 civil war which resulted in an estimated 300,000 deaths. When the violence re-emerged in 2015, nearly a decade after the ceasefire which ended the civil war, Nkengurutse was no longer prepared to put his loved ones at risk and travelled to Ireland where he entered the direct provision system.

Nkengurutse was initially sent to the Knockalisheen reception centre in Co Clare which he describes as “totally isolated” and a “horrible” place filled with depression. He also struggled to convince his lawyer, who was based in Galway, to meet with him to discuss his case. “I only saw my lawyer from Galway in person one time – we were never able to arrange a meeting. The lawyers here don’t seem to do anything until your case is refused. Instead of helping you at the beginning they wait until you have to appeal the decision.”

After three months in Co Clare, Nkengurutse was transferred to the Kinsale Road centre in Co Cork which he says was more bearable because of its proximity to the city. More than two years later, he is still in Kinsale Road. “You have no privacy in the centre. I share a room with a grown man where we both have to sleep and wash. We want to keep in touch with family but what happens when your roommate needs to call home in the middle of the night? It’s time for sleeping but you can’t tell him not to call his wife.

“Direct provision is not a bad system but it’s a poorly organised system. When a person arrives here and knows nothing about Ireland they need some sort of a welcome. But once you’re inside direct provision you feel like a prisoner. If you have a visitor, he has to introduce himself to the security guard like a policeman guarding a prisoner. There are specific visiting hours, hours for eating and hours for access to the recreation room. That’s life in direct provision.”

After moving to Ireland, Nkengurutse joined a group of Burundian drummers made up of residents from two other direct provision centres along with two professional drummers. “The drum in Burundi is seen as something sacred. It’s a sign of respect throughout.”

Playing music at events around the country gives the group the chance to share with Irish onlookers the musical history of their country. “Not everyone knows where Burundi is on the map but if you play the drum people ask where we come from and we can explain about our country.”

He is also helping a local Dutch woman called Roos Demol to raise money for music classes and instruments in direct provision centres. “We now have a team of musicians that play music from their home country. We call it Citadel; it’s a musical movement of asylum seekers who won’t be put down by the system.”

In July, following the introduction of the Government’s right to work scheme for asylum seekers, Nkengurutse received a work permit and began applying for jobs.

“It was incomprehensible to me that there were thousands of men and women with energy to work in this country and the State was making them eat like children and sleep all the time. There are electrical-engineers, mechanical engineers, doctors and journalists. The people living in centres want to contribute and help this country to develop.”

After three months of searching, Nkengurutse was offered a job with Amazon. However, finding work as an asylum seeker is a long and arduous process and opening a bank account is near impossible, he says. “It was difficult to reach this point but you have to keep fighting because if you don’t it’s easy to let everything fall apart. There’s nobody to take care of you here, you have to look after yourself.”

Last month the United Nations Human Rights Council published a report into the human rights violations and abuses documented in Burundi since April 2015 which included summary executions, enforced disappearances, arbitrary arrests and detention, torture, sexual violence and other cruel, inhuman or degrading treatment. The council warns that the perpetrators of violence are “operating in a climate of impunity perpetuated by the lack of an independent judiciary” and that the country’s political crisis has fuelled an increase in poverty.

Nkengurutse says a quick read through the UN report would make it clear to immigration officials why he has come to Ireland seeking asylum. “The reason I’m here in Ireland is all in the report from the United Nations. How can they not accept someone like me who has come from a country that is constantly in the news because of the violence. I’m here to save my family and I don’t understand what’s taking so long.”