With tensions running high in the disUnited States, these little glimmers of daftness lightened the mood 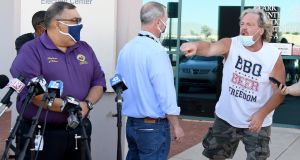 “Give us our freedom, Joe Biden!”: The protest at the Clark County Election Department, Nevada. Photograph: Ethan Miller/Getty Images

There’s never been a US election like this one, for multiple reasons. Not to take away from the seriousness of what’s at stake, and the future facing the disUnited States, but after four years of You Couldn’t Make It Up (YCMIU), some little glimmers of daftness this week lightened the mood.

Top of the YCMIU charts is possibly Kanye West, who was first to concede defeat in his bid for president. The billionaire rapper, producer, fashion designer and Trump supporter had put himself up for election against his pal. (If one reality-TV self-interested egomaniac can make it, sez he, why can’t two?)

West’s declaration of candidacy followed his wife Kim Kardashian – no stranger to reality-TV self-interested egomania herself – voicing her concern in July about his bipolar disorder on, eh, Instagram; and West’s $68 million tax rebate, which he called divine intervention, and which followed tax breaks for the mega-rich introduced by his pal Donald.

West, who’s displayed a touch of the Uncle Toms as well as of mental health issues, came late to the 2020 presidential race in July, initially focusing on abortion and faith. He only managed to get it together to appear on 12 state ballots, and won fewer than 60,000 votes –or as many as 60,000 votes if you want to look at it another way– including more than 10,000 in Tennessee, 0.3 per cent of the state’s total.

The candidate, who had never previously voted in a presidential election, had a short concession speech: he tweeted a picture of the US electoral map with the word “WELP” (look it up: the non-standard spelling of “well” conveys disappointment). His equally wordy follow-up “Kanye 2024” may indicate he intends to give it another go. Stranger things have happened.

It is not very often that a dead person appears on a ballot paper, or attract sufficient votes to win, but that is what happened to 55-year-old David Andahl. The Republican in North Dakota won a seat this week in the state legislature, nearly a month after he died of complications from Covid-19.

Politico reported he had won a heated primary after being endorsed by local senator Kevin Cramer, who said “we need more Trump Republicans in the State Legislature”. Sadly for him and many others, North Dakota had a dramatic surge in coronavirus cases over the past month. Death didn’t halt him mopping up nearly 36 per cent of the vote, winning a seat as state representative for North Dakota’s eighth district.

A Californian neighbourhood in Oakland had enough of the acrimony and decided the street’s mayoral contest this weekend will be fought by cats and dogs, Reuters reports. Vying to become 55th Street mayor are a 10-year-old Tabby (campaign poster in the yard is ‘Change Meow’), an 11-year-old Shiba Inu named Mimi (‘She’ll bark when it matters’), and a pit bull mix Macy promising to ‘Keep Oakland Ruff’. The light-hearted race aims to teach local kids about democracy, fairness, equity and justice (and presumably the more high-profile elections were at risk of not delivering on that).

‘We want our freedom from the world’

There were various loopy but amusing interruptions this week to the business at hand. In Nevada, a conspiracy theorist wearing a t-shirt emblazoned “BBQ, Beer, Freedom” and the fashionable chin-mask-in-lieu-of-beard burst in to interrupt a press conference by the Clark County registrar of voters, and roar animatedly about Biden stealing the election, looking for his freedom, and decrying various cover-ups. “We want our freedom from the world! Give us our freedom, Joe Biden!”

Just as it looked like he was going to physically explode, he finished his bit and walked off happily, having got that off his chest. A video clip of his outburst has got more that three million views and counting on Twitter.

‘Vote in the front. Party in the back’

In Ireland we tolerate the madness of schools closing for the day to become polling stations (ignoring plenty of other public buildings that could be used), so we’ve marvelled at the dearth of polling centres in some parts of the US, attempting to suppress the vote. This week, gay bars in Houston and San Francisco stepped up, NBC news reported.

Buddy’s LGBTQ bar in Houston’s Montrose neighbourhood transformed into a polling location on Tuesday, with over a dozen voting booths for those registered to vote in Harris County, Texas. Their slogan for Buddy’s Election Day event, with cocktails, karaoke and drag queens: “Vote in the front. Party in the back!” Meantime The Eagle, a gay leather bar in San Francisco, also had voters cast ballots, the San Francisco Chronicle reported, with voting “under chains hanging from pitch black ceilings” as a disco ball spun overhead.

Searching for beer, fries and fires

As everything heated up for the election, two bizarre searches were trending on Google. While some were looking for results, others sought, um, beer and chips. According to Google Trends, “Fries near me” and “Liquor store near me” were at all-time highs in search. Refining that further, as reported by Yahoo in Australia, people were specifically yearning for cheese fries and fine wine. Aren’t we all.