They can see the city lights, Europe is that close 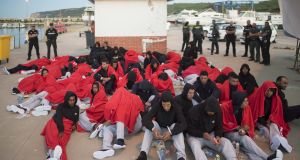 Moroccan migrants sit at the port of Barbate waiting to be transferred by Spanish Guardia Civil after being rescued in the Strait of Gibraltar off the Spanish coast in July. Photograph: Marcos Moreno/AFP/Getty Images

From the vantage point of Monte Camorro, a hill above the city of Tarifa, a broad strip of morning mist can be seen hovering over the sea. But beyond, framed against a pristine blue sky, the hazy outline of the Atlas mountains is visible.

“It’s a short crossing from the north of Morocco to southern Europe – this is the shortest route,” says José Maraver, looking out over the water. “That’s why so many people want to try it.”

This is where the Mediterranean Sea and Atlantic Ocean meet and the distance from the Moroccan coast to Spain is just 15km.

“From Morocco they can see the city lights here in Tarifa – that would make me want to cross,” he says. “It’s so close.”

Maraver is a co-ordinator in Tarifa for Salvamento Marítimo, the government agency that controls maritime traffic and carries out sea rescues. It has five rescue boats and one helicopter operating in this area, the busiest stretch of water between two territories in the world, he says, after the English Channel. With 500km of coast to patrol, the team has been busy in recent months as arrivals from across the Gibraltar Strait have soared.

In the first seven months of this year, 3,100 migrants were picked up by Tarifa’s Salvamento Marítimo, more than quadruple the figure for the same period in 2016. Nationally, this year’s total for that period was 7,600.

Of days like that, Maraver says: “You feel exhausted but very satisfied, because above all, you’ve managed to save people.” But he’s adamant that the team maintain a degree of emotional detachment.

“When a cardiologist does open heart surgery, if he lets his emotions take control he might make a mistake,” he says. “Our job is above all technical.”

Last year, Spain accounted for only 2 per cent of all so-called “irregular arrivals” – that is, migrants and refugees – to Europe, as Italy and Greece were by far the most common points of arrival. But the recent spike in arrivals to Spain suggests that percentage is rapidly rising as Africans increasingly look west for a way into the European Union.

Good weather is believed to be one factor contributing to the rise in numbers, as it makes the crossing safer. Also, as authorities clamp down on routes further east, traffickers and migrants see this area as an attractive alternative. Economic hardship and conflict remain the motivation for Africans to look north for a better life.

“If you tell people back home that things aren’t so good here, nobody will believe you,” says Mahamadou Soukouna, from Mali, who crossed by boat to Spain.

“Everybody wants to come because they think it will change their life. They’ll keep coming here.”

A typical route for a West African seeking to reach Spain is to cross Mali and Algeria, before reaching Morocco. Sub-Saharan Africans camp out there, near the Mediterranean coast, before either pooling resources for a boat or paying a trafficker to organise one.

Previously, migrants usually set off from Moroccan shores in small boats, using nothing more than paddles to make the crossing and hoping a Spanish patrol would pick them up if they ran into trouble. But now they often come in vessels that carry 30 or 40 people, powered by an engine.

A recent phenomenon is the arrival of Moroccans in Spain in relatively large numbers, escaping unrest and state repression in their country’s Rif region.

“Generally the migrants are young, due to the long journey they have to undertake to reach Europe and the terrible conditions of that journey,” says Raquel Ameijeiras, who heads the Cruz Blanca charity’s migrant centre in the city of Algeciras, near Tarifa. “Many of them don’t make it and die on the way.”

More than 6,000 people have died attempting to cross this stretch of water in the last 20 years, according to local human rights charity APDHA.

The day after the rescue of 422 migrants earlier this month, interior minister Juan Ignacio Zoido admitted that the southern tip of Spain was seeing “tremendous migratory pressure” the like of which had not been seen for years.

He added that Spain “will remain a reference point for the EU” in the area of migration, but he also acknowledged how difficult the country’s task is, saying that “from one day to the next you can’t eliminate the causes that see sub-Saharan migrants walk 6,000km, going without basic needs and facing multiple problems, and then tell them when they’re near that they can’t do whatever they have to [to get here].”

Although the Spanish rescue services appear able to handle the pressure off the country’s coast, the picture is more complex once the migrants reach dry land.

A short walk from central Tarifa, a causeway stretches several hundred metres out into the sea, leading to a rocky outcrop known as the Island of Doves, which hosts the remains of an 18th-century military outpost. Windsurfers and kayakers navigate near the island and tourists wander along the windy causeway, as far as a steel gate bearing the interior ministry insignia which stops them going further.

Behind it is an immigrant internment centre, known as a CIE, where new arrivals are sent for up to 60 days after receiving medical checks. After those two months, they are either returned to their countries or given lodging by local charities, if there is room. Access to Spain’s CIEs is tightly restricted and media are not allowed inside.

Oscar Campano and his girlfriend Mari Carmen Carrasco are visiting Tarifa from Zamora, in central Spain. They, apparently like most of the visitors who walk along the causeway, have no idea that a building full of migrants is just beyond the gate behind them.

“It’s worrying. The authorities need to control the situation more,” Campano says, when asked about the rise in numbers of arrivals. “It’s as if we want [the migrants] to come and take them in and give them more help than we give to Spaniards.”

But Carrasco sees it differently. “If they risk their lives to come here, they must be having a bad time in their own country,” she says.

The CIE centres have been the target of frequent criticism, due to their lack of transparency, the allegedly poor conditions inside and the fact that migrants are not allowed to come and go.

“People are being locked up who haven’t even committed a crime,” says Anabel Quirós, of Algeciras Acoge, an organisation that helps migrants. “And the infrastructure is extremely poor.”

The CIE in Algeciras is a former prison and a campaign is underway for it to be closed down.

In early August, the ombudsman, Francisco Fernández Marugán, warned after a visit to a CIE in Madrid that 13 minors were living inside and that the conditions “are not the most adequate in the world”. Several dozen North African migrants staged a riot in that centre in July, in a bid to avoid being deported.

The arrival of underage migrants is a particularly tough challenge, as they cannot legally be housed in the CIEs. In Tarifa, a camping site was recently opened to house minors.

Quirós says the system is at full stretch.

All the charitable organisations that take in migrants along the coast, she says, “are at saturation point, and the Andalucía authorities don’t have the resources to handle the number of minors arriving on our coastline.”

Spain has faced a similar challenge before. A decade ago, sub-Saharan Africans were using the Canary Islands as an entry point into Europe, with over 31,000 reaching the archipelago in 2006 alone. Spain responded by investing in Mauritania and Senegal – two of the migrants’ main countries of origin – and working more closely with the security forces of those two nations. It seems to have been a success: last year, only 671 migrants had reached the Canary Islands.

Spain also has experience of policing Europe’s only land borders with the African continent: its two cities in North Africa, Ceuta and Melilla, which are surrounded by six-metre-high fences.

But the current wave of arrivals is made up of many different nationalities from across Africa, and bilateral accords require substantial diplomatic effort. With the Spanish government focusing its efforts on countering Catalonia’s bid for independence, thwarting further terrorist attacks of the kind seen in Barcelona and fending off corruption scandals, migration is just one of many problems it faces.

Cheikh Sadibou, a Senegalese man who has been in Spain since 2002, says that work is extremely difficult to find here for migrants, despite the country’s recent economic recovery. By the time many migrants realise how dangerous the journey will be, followed by the difficulties of living in a CIE and then struggling to earn a living, it’s usually too late for them to turn back.

“Back [in Africa] they don’t know what it’s really like here,” he says. “They think that you come to Spain or Europe, you earn money quickly and then you can go back.”

He adds: “But they suffer here. They can end up on the street, without any work and things are really tough.”