‘Good news: Rihanna is fat. And Amal is dangerously thin’

Jennifer O’Connell: Let me save you the trouble of reading the internet 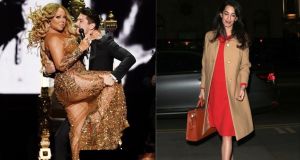 Amal Clooney is not fat, she’s something even better: dangerously thin for a woman who just gave birth three months ago. Britney Spears is just the right side of too thin – that is, she still has breasts – but don’t worry, she’s probably a fitness fanatic. Phew. And congratulations to Jennifer Aniston, who is celebrating a decade of speculation over whether she is pregnant, or recently ate a sandwich.

I just saved you the trouble of reading the internet – or at least the corner of it dedicated to policing women’s bodies, offering limb-by-limb analysis to show you that, though they might appear to have it all, they’re really much less happy or less confident than they appear. Which is to say, not a “corner” of the internet so much as the entire ground floor, the stairs, upper landing and both guest bedrooms.

In fact, if the internet has a more important purpose in 2017 than scrutinising women’s bodies, wardrobes, behaviour and life choices, I am not aware of it.

Making the world’s information universally accessible and available? Connecting its most disadvantaged communities? Nope, nowhere near as important as the daily monitoring of Amal’s thigh gap. (Case in point: there are 19.6 million results on Google for “thigh gap”, versus 2.3 million for “poverty gap”.)

If Instagram had been around in the time of Helen of Troy or Marilyn Monroe, would commenters have piled on to slut-shame Helen and tell Marilyn to go to the gym? Probably. However, the internet didn’t invent the phenomenon of women being held up to unattainable beauty standards, and aggressively chided when they fall short. Even the Daily Mail didn’t invent it.

For all we know, when our earliest human ancestors crawled out of their cave and stood up on two legs, they started beadily eyeing one another up to see whether Lucy the Australopithecus had bounced back to her pre-baby body yet. Our obsession with beauty is part of the human condition.

But the genius of outlets such as Heat magazine, the Daily Mail and TMZ was in identifying the desire to bully or berate those who appear to have what we don’t: not beauty, per se, but confidence. The internet gave this desire a forum, and allowed anybody to curate their own sidebar of shame.

The uncomfortable truth is that, when it comes to policing women’s bodies, wardrobes and behaviour, it is frequently other women who are the worst offenders.

The pressure to be beautiful – and to be beautiful in a particular, narrowly prescribed way – has never been more intense than it is right now, in the digital age. When Forbes recently published its list of the best-paid women in Hollywood, what was striking was how – apart from Melissa McCarthy, who gets a pass because she’s funny – the top 10 all looked so similar: tall, white-skinned, high-cheekboned and thin, thin, thin. The same was not true of the top 10 men, which included men of different ethnicities, and men whose looks might kindly be described as “characterful”.

Jennifer Aniston – No 2 on the list – recently spoke about this pressure in an interview with Glamour, saying it’s “hard enough being a young woman” without their worth “being quantified by how they look and their Instagrams and likes”. Her comments were republished by the Daily Mail. Underneath, someone wrote “Wow, never noticed her poor toes”. Someone else said she “definitely” looked pregnant in the second picture.

So if we’re not among the 0.001 per cent of the population that fits in with that narrow definition of beauty, we console ourselves by searching for that chink – that little sliver of vulnerability -- in their otherwise beautiful, thin, smug veneer. Yes, Amal is brilliant and thin and successful and married to George Clooney and the mother of twins – but is she secretly starving herself? Okay, Jen may be gorgeous and rich beyond our wildest dreams and have an enviable lifestyle, but she doesn’t have kids yet and, hey, check out those weird toes!

It is an understandable impulse, but an unhelpful one.

Here are some things that would be more helpful: Stop clicking on those stories. Stop perpetuating the cycle. Stop giving little girls the message that their looks are their most important attribute. Stop noticing only when they’re pretty, and start noticing when they’re fearless or inventive or kind. If you’re a woman, stop pitting yourself against a standard you can never hope to meet. Stop judging others when they too fall short. Find a woman you admire and tell her why you admire her. Start with yourself.

It’s not the sidebar of shame that’s holding us back – it’s the vicious circle of insecurity and envy.