No love lost between my grandfather and his donkey, but there was respect

Family Fortunes: The donkey on the smallholding in rural Ireland was truly the beast of burden, his cart carrying milk churns, turf and even pigs, sheep and other small livestock 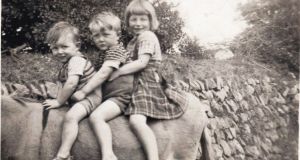 Seán Ryan on the family donkey with his brother Denis and sister Anne behind. The photo was taken in July 1948 at the author’s grandparents’ smallholding in Adamstown, Co Wexford.

This look-back at our family life in the late 1940s and early 1950s is really about an institution of rural life in Ireland those days – the donkey. My grandfather – along with many others of his generation – relied totally on the donkey and cart for all his transportation needs.

We lived in a modest two-bedroomed house on Millmount Avenue in Drumcondra, Dublin but my father, who was a garda from Cork, believed in a rural upbringing so every summer without fail we were packed off to my mother’s parents in Adamstown , Co Wexford.

As soon as we were old enough (and I’m talking around nine years old) our first task every morning was to ‘yoke-up’ the donkey. But first of all we had to catch him and that was not easy. He had no intention of submitting easily to what was bound to be another day of drudgery. But eventually we would corner him and – taking great care to avoid his teeth and hind legs – we would get the bridle on him and from then on he was resigned to his fate.

The donkey on the smallholding in rural Ireland was truly the beast of burden. His small cart was capable of carrying just about anything – milk churns, turf and with the ‘creels’ fitted, even pigs, sheep and other small livestock. Pension-collection day in the local village resembled a donkey convention, the street being lined with carts – there were bicycles too but mainly for younger people of pre-pension age. It was also the day to bring the ‘wet’ battery from the wireless for recharging.

There was no love lost between my grandfather and his donkey but there was a mutual respect and understanding. Even though somewhat unwillingly, the donkey did everything that was asked of him but was never subjected to unnecessary hardship. For example, when an incline of any significance had to be negotiated, we were obliged to dismount and walk beside the cart.

All day long, the donkey would have to be coaxed and cajoled along. The only time he would break into a trot would be at the end of the day’s work when he knew he was heading for home. He had an uncanny knack of detecting when this moment had arrived and needed no further prodding.

This ‘donkey syndrome’ as I call it can be observed today in many other walks of life. For example, it always strikes me that the crew on the last flight of the day from London to Dublin seem to get everybody boarded and seated more efficiently than any earlier flight, and did you ever notice how the last Dublin Bus returning to the terminus at night always seems to move more urgently?

By Seán Ryan. The fee for this article has been donated to the St Francis Hospice in Raheny