Much-loved and colourful figure in the worlds of Irish advertising, cricket and humanism 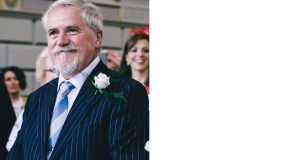 Arthur Deeny died of a brain tumour on March 18th, having spent his last two weekends in Newtownpark Nursing Home with his family watching Ireland complete the Grand Slam, fortified with sips from a bottle of Chateau Latour 1995.

He was a much-loved and colourful figure in the worlds of Irish advertising, cricket and humanism.

He was born on July 20th, 1953, the third son of Dr Donnell Deeny of Lurgan, Co Armagh and his wife Annie, née McGinley, a niece of the Gaelic scholar and playwright Peadar Toner Mac Fhionnlaoic (Cú Uladh).

He was educated at Clongowes Wood College, where he was a courageous little hooker but excelled more at the crease and in the debating chamber, winning medals on three occasions. He initially read medicine at Trinity before prevailing on his father to let him study his real love, English. In 1973 he won the maiden speaker’s prize in the Hist. He wrote for TCD Miscellany.

Early parenthood with Síle Connaughton, who became a prominent figure in the world of contemporary Irish art, led to three beautiful daughters, to whom he was devoted throughout his life.

Arthur had a notable career, as both copywriter and creative director in Doherty’s in Dublin; Fletcher, Shelton, Delaney in London; and for his final 15 years at Javelin. He created the instantly recalled jingle of the 1990s with “Fleetwood would, would Fleetwood” and penned Packie Bonner’s and Roy Keane’s scripts for the Irish Permanent’s Italia 90 campaign.

A gifted wordsmith, Arthur’s play The Mot and the Magician went from The Ha’Penny Bridge Inn to the Edinburgh Festival Fringe. He had his own radio show, Commercial Breakers, and was a celebrated stand-up comedian.

While attending the production of his play Fogging (an Ulster word for stealing apples from an orchard) about the conflict of duty with friendship during the Troubles, he had a stark reminder that truth can be stranger than fiction. Driving down the MI from a rehearsal at BBC Belfast he witnessed a young woman being pushed out of a moving car after, it transpired, being stabbed by her ex-boyfriend.

Arthur picked her up and rushed her to the nearest hospital where she was successfully treated. When he rang the police to report it they said they were aware of it and the subsequent incident – the perpetrator had killed himself from a motorway bridge.

He became an enthusiastic part of the revival of Irish cricket, leading the celebrations at their famous victory in the West Indies.

He captained not one but two cricket teams, Arthur’s Knights and the Tequila Slammers. A competition is to be named after him. He was delighted when his three daughters followed him to Trinity. He had written with wit about his time there in Trinity Tales – The Seventies (Lilliput 2011).

It was a proud day when he, Síle and their three daughters all took their MAs together in 2016, prompting Trinity provost Patrick Prendergast to name them the Five Masters!

He is survived by two two grandsons, William and Arthur, with a third on the way.

A vibrant humanist memorial service was held in the Exam Hall in Trinity College to celebrate his life, where Javelin crafted a poignant video in his honour. His five siblings were present: Michael, former Horslips manager and chairman of Equitas; Fionnuala Cook OBE; Dr Jennifer Rand; Sir Donnell Deeny; and Paris fashion editor Godfrey, who delivered one of several moving eulogies including those from his three daughters: Leda Connaughton-Deeny, a vice-president of Viacom; Shaula Connaughton-Deeny BL; and Cordaella Nicholas, head of analysis for Bank of Ireland. Síle read two pieces written by Arthur.