Hilary Fannin: We were close, we were broke. Life was full of uncertainty. We relied on each other, helped each other out, sharing money and hopes and chickens 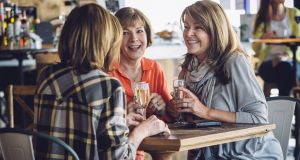 'It’s been a quarter of a century since the three of us flatmates, and my friend’s sweet young child, lived together in a ramshackle redbrick house.'

We took the train; my old flatmate picked us up at the station. I hoiked up my gúna and squeezed into the back, between her grandchildrens’ car seats. We were going out to celebrate a couple of birthdays, one mid-50s, the other early 60s. We drove to the bar where we’d arranged to meet our other former housemate.

We winded our way through a trendy south Dublin neighbourhood, where glossy young men with over-developed thighs strode around and well-groomed young women stepped gingerly out of taxis, their stilettos grazing the melting snow.

“Nearly there!” my friend announced, as if she was navigating a steamer through the Suez Canal rather than a second-hand hatch-back through a sea of IT consultants. We parked right outside the bar – any closer and we would have had to include the car in the round. Three pints, a 7UP and a quart of diesel please.

I’d never been in that particular bar before. Apparently, it’s undergoing a revival. You could tell it was fashionable by the people in the corner with interesting eyewear, drinking organic beers and eating fat pickles on sourdough bread. That and the fact that the barman, a sanguine chap with dreadlocks in his beard, didn’t seem in any rush to serve me despite my being difficult to ignore in the gaudy red skirt I’d dragged out for the occasion.

I couldn’t hear what the people with the designer frames were talking about, but I’d guess that if it wasn’t genomics or methods of non-binary gender identification, it may well have been the provenance of their juicy pickles.

I was excited to be out of my Northside suburb. Don’t get me wrong, I like my local – there are quiz nights for the football club and karaoke on a Saturday – but it doesn’t serve pickles on bamboo.

Clutching my gin (when it eventually materialised), I hoisted myself and the skirt on to a shiny bar stool, landing there briefly before sliding right off the other side in one deeply uncool movement. Someone kindly offered me a chair.

The interior of the bar was pleasantly murky, and there were glass cabinets full of objects that looked antique, hip flasks and hair clasps and long-handled spoons.

The four of us – my flatmates, my husband, and I – gathered by the window. Cards and kisses were exchanged. Organ recitals were undertaken, the condition of each other’s hearts and livers and kidneys inquired after and put to bed. We talked about all sorts of things: studenthood and retirement, grief and grandchildren, work and money, sex or the lack of it, politics, the merits and demerits of all-over body-waxing. And we talked about friendship.

I’m not remotely au fait with current argot, but there is a word I hear from time to time, “fam”, which of course derives from “family” but which means something different. The Urban Dictionary definition of  “fam” is “your peoples, ones that you can trust dearly, someone you consider family”.

It’s been quarter of a century since the three of us flatmates, and my friend’s sweet young child, lived together in a ramshackle redbrick house that none of us could have dreamt of affording to buy when the landlord decided to sell.

We were close, we were broke. Life was full of uncertainty. We relied on each other, helped each other out, sharing money and hopes and chickens. Rattling around in that draughty house, we were a young single mother and her beautiful daughter, a young gay man, and a straight, sometimes very lost, young woman. And I apologise if that’s an ultra-binary description, but in Dublin in the early 1990s our genders and status and sexuality defined much of the way the world treated us and how we protected each other in that world. We used to sit around our coffee-stained kitchen and wonder about what would happen, how things might change, who we might become.

I looked at our faces on our recent night out, reflected in the darkened window of the dead-cool bar, and realised that I don’t see us as a casual observer might; middle-aged, greying around the gills. I cannot isolate the detail of my friends’ faces in the same way that I can enumerate the objects behind the glass. Looking has become an act of memory. I see us in the past; I  see us, a chosen family, in a continuous, eager present.

Do you have a Caroline Flack relationship with social media?
10

These homes are the business – or should that be the other way round?
Real news has value SUBSCRIBE