Broadside: By the time we were in sight of Leenane the driver had collected a tailback of at least 15 cars 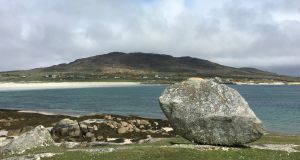 Gurteen beach, between Roundstone and Ballyconneely. It’s a picture-postcard scene I trip across as I jaunt off along the N59 from Westport to Clifden. Photograph: Bryan O’Brien

I have come to call it Tourism Terrorism Time. Well, it is summer and the sun is shining amid the showers here in the wild west and our higgledy-piggledy roads are filled with shiny new hire cars and trundling camper vans being driven by hordes of wide-eyed visitors – lurching along as if they are astride bonnet-clad donkeys who have just walked off the set of The Quiet Man.

They wander forth in first-gear oohing and oh! mon dieu-ing about how green the fields are; how the hills roll off and disappear into magical mists; how rainbows appear like artists’ palettes and leprechauns scurry down rabbit holes with crocks of gold under their green tutus.

Being a Miss Daisy myself, I like to tip along in my trusty-steed at a most civilised 60 to 80km/h, with my foot hovering over the brake. Always expect the unexpected, I tell the Pirate Princesses, my boy-racer daughters.

I mean at this time of the year – the high season – it could be anything from a stressed-out sheep whose gambolling offspring assume the byways and boreens are a playground for ovine shenanigans or armies of cyclists who proceed – heedless of honking horns – in swerving columns towards distant finishing lines in some god-forsaken lay-by on the other side of the Maamturks or the Twelve Bens.

Such is the picture-postcard scene I trip across as I jaunt off along the N59 from Westport to Clifden on a recent Sunday morning. This magnificent rollercoaster ride brings me along boggy roads that meander towards the precipitous wall of mountains overlooking the Killary fjord.

As anyone who has travelled this route will attest: it is a poetic odyssey, breathtaking whether covered in mists, bombarded by howling winds, or all azure blue with scatty cirrus playing hopscotch high in the sky.

Far from the mind-numbing artery that is the M50, this narrow roadway can be so bereft of human traffic during the long winter months that one might conclude it was a great, privately owned estate with its shooting lodges and rivers full of salmon and valleys of rich hunting grounds. But that was its provenance back in those days of ascendancy tally-hos and toodle-pips.

These days it is an ambling arm of the Wild Atlantic Way – a new playground for the American descendants of coffin ship survivors and high-rise, land-locked European visitors.

Indeed, it was one of these camper-van pilgrims, the co-pilot invariably an earnest-looking woman with grey hair and spectacles, who almost caused my Sabbath safari to go off the rails.

Fortunately, I wasn’t rushing for a plane, a train or to a family wedding. The problem was that the pilot was revving up as if he was in charge of a 747 taking off from a runway and then suddenly slowing down as he ambled and careered from right to left along the winding road; both himself and his female companion distracted, bowled over by the gallery of spectacular scenery surrounding them.

By the time we were in sight of Leenane the Flying Dutchman was like the Pied Piper of Hamelin with a tailback of at least 15 cars behind him and me, his outrider stalker.

My sighs and groans now had descended into a most unbecoming litany of expletives as I prayed he would turn left for Maam Cross and Galway and I could liberate myself from second gear, turn right and make Clifden before the pubs shouted last orders.

But that rising road rage reprieve was not to be. He navigated to the right in Leenane as if he was the Bull McCabe following a stampede of escaped cattle.

That was it. I was determined to pass him out at the first opportunity when there was a wide stretch safe enough that I wouldn’t be hurtled into a field upside down. There are very few such oases on the N59. Ask the ongoing campaigners who continue to beg their politicians to upgrade this busy Wild Atlantic Way corridor.

Just as I put the foot down to the floor to make my manoeuvre out he swerved violently across the road – to avoid a puddle. Yes, a puddle. Not a pothole. A rather big puddle.

I never knew my car horn was so powerful. He looked positively pale as I passed him out, spewing out expletives like a fishwife attacked by a swarm of midges.