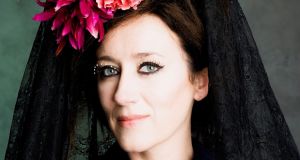 “If you have a feeling against abortion…then you never need to have one,” says Maria Doyle-Kennedy.

“But you can’t decide for people who are not you. It has too great a consequence. We need to act with compassion towards others, that’s the basic thing,” she told Róisín Ingle on the latest Róisín Meets podcast.

Doyle-Kennedy was on the podcast just days after the promotional tour for the final season of the hugely popular BBC America TV show in which she stars, Orphan Black, had wrapped in New York.

After five years on the show and spending her winters in Toronto where it was filmed, Doyle-Kennedy was sad to say goodbye to her fellow cast members and was full of praise for lead actor Tatiana Maslany, who plays multiple characters simultaneously on Orphan Black.

“She is a genius. Being around her was a remarkable experience…Literally, her own mother would forget it was her playing all those characters,” she said.

You might expect Doyle-Kennedy to take some time off now, but instead she is preparing to release an as-yet-untitled new album. Two songs from it, Pride and Sequin, can be heard on the podcast.

She is also heading to the Galway Film Fleadh in July with her directorial debut, A Different Kind of Day. It was filmed in and around Rathmines, close to where she lives, and stars one of her sons in a lead role.

The film is about two people with special needs as they go about their day and Doyle-Kennedy hopes “to shake up perceptions” with it.

To listen to the full conversation between Maria Doyle-Kennedy and Róisín Ingle, go to www.irishtimes.com/podcasts iTunes, Soundcloud or your preferred podcast app.

Pride, the latest single from Maria Doyle-Kennedy is out now.

Have you had a crazy coronavirus dream?
9