Welcome to the creepy, troubling Facebookville 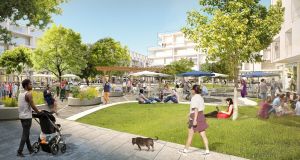 Welcome to the world’s most exclusive resort. Getting here can take months, even years, of gruelling hard work and single-minded dedication.

You can check out any time you like – but if your hosts have anything to do with it, you’ll never want to.

While you’re here, treat yourself to a free mojito cupcake in Sweet Stop, and then take a trip around campus on the Universal Studios-style train. Hop off at the vintage games arcade, or stop for more refreshments at the Philz coffee shop. Or go for a stroll in the nine acre landscaped rooftop garden.

If none of that appeals, while away a couple of hours in the vast, 300 sq metre woodworking shop, where two full-time instructors are on hand to help you craft your own Harry Potter wand or ukulele. And when that’s done, you can have someone wash and iron your laundry, have your dental and medical needs catered for, get your hair cut or have your bike fixed.

Of course, this isn’t actually a holiday resort: it’s Facebook’s headquarters in Menlo Park, a 40,000 sq metre, Frank Gehry-designed, gilded cage, where work-life integration isn’t so much a corporate buzzphrase as an unofficial mission statement.

The perks are plentiful, and they aren’t merely an expression of the company’s benevolence towards its employees, or a way of attracting talent in a competitive employment market. Make no mistake: the on-campus health centre, the nap pods, the free ice-cream and even the hand-turned ukulele lessons are all part of a strategy to ensure that employees have as little need as possible to ever leave.

Now Facebook is taking it one step further. It has unveiled plans to build an entire village across the street from its HQ. Called Willow Campus (but already dubbed ‘Zuckerbergh’), it will be open to the public, and will include 1,500 apartments, a grocery store, a pharmacy, a hotel, a cultural center, public parks, a shopping centre and – of course – copious amounts of office sapce. There’s talk of a farmer’s market and more than 200 of the apartments will be rented at “below market rate”, according to a company blogpost. (In an area where median home prices are well over €875,000, “below market rate” doesn’t, however, mean “cheap”.)

Right across Silicon Valley, companies are erasing the boundaries between their employees’ private and working lives, promising them more perks and better workspaces in exchange for sacrificing just a bit more autonomy.

This summer, employees have begun relocating to Apple’s €4.3 billion headquarters – Apple Park, unofficially known as “the spaceship” – in nearby Cupertino. By the time it is complete, it will rank as the world’s third most expensive modern building. Expanding across 230,000 sq m of workspace on 71 hectares, it is so vast it can literally be seen from space.

Which might be as close as the rest of us are likely to get.

Unlike Facebook’s vision of a community village, the Apple campus – with the exception of a visitors’ centre with a cafe and a shop – is closed to everyone but the company’s 12,000 employees. It figuratively and literally faces inwards on itself, turning an impenetrable exterior to the outside world.

One reporter, Steven Levy, from Wired did get a look recently: “The stone for the exterior of the fitness and wellness center was sourced from a quarry in Kansas, and then distressed, like a pair of jeans, to make it look like the stone at [Steve] Jobs’ favorite hotel in Yosemite,” he wrote, noting that the sliding glass doors for the cafe are 25.9m by 16.5m (85 ft by 54 ft) – or four stories high.

The campus features an underground, 1,000-seat Steve Jobs Theater; a 9,300 sq m gym; an orchard, a meadow and a pond; and two miles of walking and running paths. The design for the fire systems was borrowed from luxury yachts. Even the wood paneling on the walls is hand curated: it was harvested at the exact time of year – January, if you must know – specified by Steve Jobs to minimise sap. If employees are going to be working 24/7 you can’t expect them to put up with sappy walls.

Google was the pioneer of the workspace that aims to cater to every conceivable employee need, introducing everything from free food to nap pods to massage credits to a dog-friendly workspace.

Now it’s also about to take the inevitable final step towards total work-life integration: last month it announced it would spend €26 million on 300 modular apartments for workers at its campus headquarters in Mountain View, home of the Googleplex. Three hundred units may be a small step towards combatting the Bay Area housing crisis, but it’s a significant statement of Google’s intentions.

There’s nothing wrong with companies showering their employees with perks, or helping them to get a foot on the housing ladder. There’s nothing wrong with companies such as Apple building €4.3 billion monuments to their own greatness, so long as their shareholders don’t object. But there is something deeply troubling about the prospect of a work-life integration so absolute that employees end up – effectively or actually – living at the office.

The most obvious issue is the quality of life of employees – who, once installed in their shiny new homes on campus, have less incentive than ever to leave, and nowhere else to go to anyway. At the best of times, the pressure to maintain a permanently positive facade in an environment where being ‘a good cultural fit’ is mandatory can be exhausting. Imagine how much more intense that pressure when your neighbours are also your colleagues.

By creating insular, hyper-privileged, modern versions of the “company towns” – places where employees work, socialise, eat, play, love, live and one day raise their families together – these tech giants will become increasingly isolated from the customers they claim to serve.