What female hedgehogs have in common with people from Hackballscross

Patrick Logue: An encounter in the garden had me researching these spiky characters 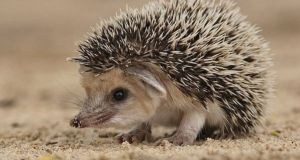 “We are not sure how the hedgehog got into our little suburban garden, it being surrounded by 6ft walls”

It’s been battle royale in my back garden since I last spoke to you here. Tadgh is determined to bag himself the scalp of a hedgehog, buoyed by his victory over an unfortunate crow and spurred on by his unprovoked attack on Molly, the sprightly young terrier mongrel living on the other side of the slatted fence.

What he would give to continue his killing spree and go down in the Jack Russel Hall of Fame. The rest of the household? It’s taken (dog) years off us.

We are not sure how the hedgehog got into our little suburban garden, it being surrounded by 6ft walls and fences, as well as the back of the house itself. In more imaginative moments we saw him clasping on to a low-hanging branch of the Virginian creepers and scaling the wall, or in another mental film reel parachuting in from a drone. In reality he must have got wind of the regular supply of food scraps falling from the bird table and some crunchy dog food to be had in our garden. And, so, he must have proceeded to scuttle under the side gates past the bikes, past the wheelie bins and onwards to a pile of branches to call home.

It turns out everybody’s got an opinion on hedgehogs. My brother volunteered that hedgehogs were “notoriously shy”, while a friend offered up information that they live in family units and therefore there was likely to be number of hedgehogs, young and old, lurking in the back garden. If only Tadgh knew this he’d mount a 24-7 watch on every pile of branches and every shrub and compost heap. Other advice offered in several recent hedgehog conversations, however, revealed that a group of hedgehogs, while known as an “array”, is rarely seen and, in fact, they usually don’t hang out together at all. Except to procreate, apparently.

The first we knew of Gregory (as in Gregory Gráinneog of Bosco fame) having taken up residence was via an unusual-sounding bark one night a few months ago. There are different kinds of bark. One, low and brief, means “let me out I need a wee wee”; another, slightly more shrill, means “let me in I’ve done my wee wee”. Yet another is reserved for every time the ice cream van drives past, sirens blazing, and yet another is deployed when Molly brings her wet, curious nose close to the slatted fence. If a stranger dog saunters past the other side of the 6ft wall, all barking hell breaks loose.

But this was different: high-pitched and sustained and at a time usually reserved for the first two barks mentioned above. I had already put on my pyjamas, so I threw on a pair of old runners and switched on the torch on my phone and headed out to investigate.

What I discovered was himself standing in the middle of the lawn, just behind the trampoline and the right of the vegetable patch, nose-to-spike with an unfortunate ball of hedgehog. Mutt was duly dragged back inside and we all got on with our lives.

No sign of the hog then for a few weeks. Sir Psycho satisfied himself with snapping at the odd butterfly, bee or wasp that buzzed past, occasionally bringing one down and trying to snaffle it without getting stung. That was until one particular day when a murder of crows was making its daily visit to the bird table for freshly laid potato skins and week-old soup. One of them, the poor aul’ thing, misjudged his landing pattern, was lunged at violently and was liquidated within seconds. Weirdly, not a single crow set wing in the garden for about two months after the incident, allowing the little birds – the starlings, blackbirds and sparrows – to gorge themselves on lashings of swill to their tiny little hearts’ content. So much so that we had to start putting a lot of the leftovers into the brown bin.

Then one random Tuesday, the spiky bark returned one night and we knew it was round two. When I finally discovered Paws McGregor, he had a blood-stained mouth and a guilty look in his eye. On closer examination we discovered a large spike stuck into his snout, causing the bleeding. Gregory had survived another day. We know this because while out dead-heading some roses the other night, I came across him trying to liberate a piece of broccoli that had been discarded by the birds (the one thing they do not like is broccoli). He curled and I left, and by the morning it was as if it had never happened.

We aren’t sure what’s going to happen next in dog versus hog but we are prepared. I’ve been reading up on the little creatures this week and come upon some other interesting facts. The daddy hedgehog plays no part in the rearing of the young, or the hoglets as they are also called. If a hedgehog is out during the day, it probably means it’s in trouble, and when a mother gets stressed she will abandon or eat her young, a habit I had previously only associated with people from Hackballscross.

From yoga to HIIT training, your guide to solitary exercise
6

Looking for a nifty home-working desk? This Irish designer model could solve your problems
Real news has value SUBSCRIBE