The Canadian prime minister is visiting Ireland. Is he the most lusted-after modern leader?

Since his election in October 2015 Canadian prime minister Justin Trudeau has had many viral moments, here are some of the best. 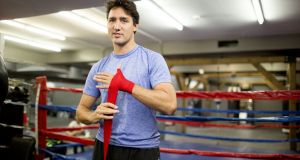 Justin Trudeau is coming to town (arriving Monday night, July 3rd) and we’re all feeling a little over-stimulated, what with the handsomeness and the wokeness. So here at the Irish Times Features Department we’re going to go full Diet Coke with the situation. Yeah, we’re going to totally objectify some dudes!

The floppy haired Canadaddy Justin Trudeau spends his days wandering around the houses of parliament carrying a kitten and praising feminism then dropping the kitten (“Oh Goddess!” he gasps) so he has to bend over to pick it up in those tight trousers. “That’s a little something for you,” he whispers, looking back at you over his shoulder. Then he clutches the kitten to his bare chest (sorry, I forgot to mention, he’s barechested), before signing something enabling oil pipelines.

“What was that thing about oil pipelines?” you say, but you feel a little flushed and he’s offering you a cool glass of homemade ethically sourced lemonade and now you’re on a yacht for some reason and he’s in tiny shorts. “Oh Justin!” you say and you swoon.

Somebody call a phoar-brigade, for the newly elected president of France, Emmanuel Macron, is a) not a fascist (phew!) and b) a hunky neo-liberal with lovely hair who may, ironically, be planning to withhold funding to the phoar-brigade service.

“Hey girl,” he whispers. “Why don’t you and me privatise some industries, break the unions and then liberalise the French economy?”

Is… is that sexy? you wonder.

“Kerrygold you have zis in Ireland too?” he adds.

Damn right it’s sexy. Good job you and Brigitte spent the afternoon trashing out that “arrangement.”

Taller, more muscular and with more stamina than all other national leaders put together, according to the North Korean Central News Agency, Kim Jong Un is an impressive, much loved, geopolitical sextropologist.

Here are some things he invented: the two sexual positions, sunset walks, the internet. He’s working on the female orgasm, though scientists say this might be impossible (“I’m not giving up!” he promises). He is very, very good at sexy stuff no matter what the decadent western media tell you.

He wasn’t perfect, what with the wars, the murderous drone strikes and the ongoing culture of surveillance, but he was witty and dignified and he could read without moving his lips and he felt like he had a coherent belief system.

Varadkar’s “sexiness” may just be of the media sort, as in, “that’s a sexy story, Tarquin, let’s put it on the front page” but it is true that the world can’t get enough of our young, gay Taoiseach.

With his identity politics credentials and Tory policies in perfect electoral balance, Leo Varadkar is the ideal politician for those who like to get up early in the morning (ahem).

Oh my, even just looking at a picture of “the lads” is enough to get me, or you, or indeed, an entire economy overheated. Theirs is an understated allure.

They mightn’t look like much but you can tell they know how to get one’s market into a state of excitement and one’s interest rate to rise. They’ll be gone the next morning though. (In this picture “the lads” are announcing what they’re about to do to you.)

Who could forget the hatless, nuclear-war courting, mid-century sextravert or the chuckling third-way sexpest? It’s almost as though powerful men can do whatever the hell they want and their coercive creepiness will be interpreted as sexual charisma by a captive media chorus. Speaking of which…

People write songs about him, he rides horses with his shirt off and he regularly kills large wild animals and, according to some reports, people. To tell the difference between Putin and a character on Game of Thrones, just remember that Putin has already won the Game of Thrones.

The early Irish state was basically an episode of Dawson’s Creek, with the Irish people (Joey) torn between an uptight neurotic with plans to launch a soft-theocracy on the western frontier of Europe (Dawson) or a mischievous funster who had probably shot people in the face (Pacey). We are locked in this psychosexual dynamic to this day. I mean, who else are we going to pick? Labour (Chad Michael Murray in Season 5)?

Here’s an excerpt from some fan fiction I wrote about the time you met Donald Trump.

“But Mr President we need to discuss the legislation!” you say, tapping at the important file you’re carrying and peering over the frames of your intelligent secretary glasses.

He asks you to wear his big red tie and his hair. You do so and this delights him.

“Dance for me,” he demands. You begin to gyrate. You do the Hokey Cokey and the Robot and the Rock the Boat dance and this inflames his lusts. He presses another button and the large revolving bed JFK installed pops up from beneath the floor

Trump climbs onto the bed where he lays a batch of pulsating eggs before clambering, exhausted, to his web in the ceiling. You fertilise the eggs then a secret service agent escorts you from the premises. It has been the most magical experience of your life. You will think of it often.