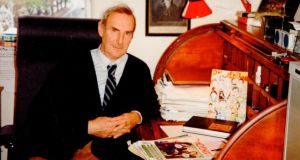 John Mulcahy was a trailblazer for investigative journalism in Ireland.

John Denis Mulcahy, who has died aged 86, was one of the most significant journalists and publishers of the last half century in this country.

In a career, and a life, characterised by a combination of resilience, professionalism, innovation and sheer courage with few, if any, peers in his generation, he was a trailblazer for investigative journalism, holding up a mirror constantly to power. In the process he mentored some of the best young journalists of his generation, who would go on to become household names of the Irish media.

Working in a fascinating period of national upheaval, which saw Ireland’s entry to the then European Economic Community, the Northern troubles, the arms trial crisis, the national coalition government of 1973-1977 and the election of Charles Haughey as leader of Fianna Fáil in 1979, Mulcahy was fearless .

Among the issues he raised was corruption in the planning process, revealing local councillors’ connections to developers and the connections between the later-to-be bankrupted Patrick Gallagher and Haughey. Other issues tackled which today have a particular resonance were, in the early 1970s, the plight of Traveller families living in makeshift camps in Tallaght, slum housing and the patronage of judicial appointments.

Most dangerously for him, Mulcahy challenged the behaviour of the British authorities in Northern Ireland. In 1976, Hibernia reporter Jack Holland wrote the “Strasbourg report”, the inside story of the alleged IRA prisoners effectively tortured by RUC men, whom Holland named. The refusal of The Irish Times – Hibernia’s printers – to print the article on legal grounds prevented its publication. An amended version was published subsequently, and Mulcahy and Holland were later vindicated by the judgment of the European Court of Human Rights at Strasbourg.

In 1974, Mulcahy organised a petition against internment, which attracted more than 100,000 signatures, and personally presented it at 10 Downing Street.

Besieged by libel actions, Hibernia closed in October 1980, but in its final issue there was an unusual tribute from Michael Killeen, the legendary managing director of the Industrial Development Authority, announcing that “your probing analysis of Irish business affairs” would be missed. This pointed to another of Hibernia’s innovations: it was one of the first media outlets to examine forensically the performance of, in particular, publicly-quoted companies, helping to set a template for the kind of rigorous business reporting which readers of Irish newspapers now take for granted.

After Hibernia’s demise, there followed, in quick order, two further Mulcahy initiatives. Teaming up, untypically, with Sunday World publisher Hugh McLoughlin, he launched the Sunday Tribune in 1980. There, he made a very significant move by appointing Geraldine Kennedy as the country’s first woman political correspondent of a national newspaper. Ms Kennedy was later, of course, to become the first woman editor of The Irish Times. Again, journalists who were to become household names in Ireland, including Eamon Dunphy, Mary Holland and Tom McGurk, were also hired by Mulcahy.

The relationship with McLoughlin was never easy, and Mulcahy resigned after about 18 months to set up the aptly-named Phoenix magazine, a nod to his resurrection of Hibernia’s radicalism. Mulcahy, however, gave his new venture a lighter tone, employing its by now trademark ridicule and satire to afflict the powerful, although retaining a hard, investigative edge.

Among the magazine’s scoops over the years were revelations about Charles Haughey receiving £1 million from Ben Dunne while still in office as taoiseach, Michael Smurfit’s involvement in a property deal involving Telecom Éireann when he was its chairman, Fr Michael Cleary’s child and details of Michael Fingleton’s pension pay-off from Irish Nationwide (€27.6 million, months before it had to be rescued by the Government).

Mulcahy bought the Irish Arts Review in 2002, turning it into the country’s premier arts magazine and publishing it quarterly; it had previously been an annual only. The review has become renowned for its production values, giving a glossy and highly colourful platform for both contemporary Irish art and for art history. Mulcahy subsequently served on the board of the National Gallery, where he was noted for his robust defence of its independence from government interference.

Throughout his life, Mulcahy was dogged by terrible family tragedies. Born in Perth, Australia, in 1932, to an Irish-Australian doctor, Daniel Mulcahy, and his Irish wife, Josephine Delaney, a nurse, he was just three when his father died. Returning to Ireland, his mother married again, another doctor, Pat Nyhan, but he also died when Mulcahy was just 15 and a pupil at Clongowes Wood College.

In 1954, his eldest sister, Peggy, passed away in South Africa, and, most tragically, his daughter Natasha, aged six, was killed in a road accident in 1968.

On leaving school, Mulcahy worked in hotels in Switzerland and London, and, from 1952, studied economics by night at Trinity College Dublin while working for a chemical company. He married Nuala O’Farrell, an Irish graduate in music, while working in Canada in 1957, where he got his first freelance jobs in journalism as a contributor to Canadian financial newspapers. Nuala worked alongside him at Hibernia as literary editor.

On return to Dublin in 1960, he had the good fortune to find a job with Con Smith of the car-importing Smith Group, who was an investor in Hibernia. It was this fortuitous and entirely back-door method which resulted in Mulcahy finally finding his niche eight years later.

John Mulcahy is survived by his widow, and by his children Nick, Michael, Stephen, Brigid, Jack, Hugh and Aengus, by his brother Michael and his step-sister Judy Allen (nee Nyhan). Apart from Peggy he was predeceased also by his sister Deirdre Bunbury.

7 tips to improve your sprinting
7