‘Ah yes, you have Parkinson’s disease. But don’t worry, it won’t kill you’

Gary Boyle on . . . a shocking diagnosis 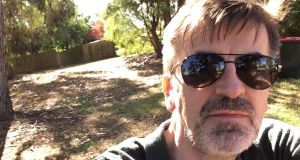 Gary Boyle: “Parkinson’s is my life now and I acknowledge its presence, while not letting it ever take over.”

I’ve always considered the glass as half-full, no matter how empty it looks. But all that optimism, all my positivity, indeed, my entire world, all but tumbled down the morning I received news I didn’t want to hear, in a manner that I’ve only come to understand quite recently. It was Thursday, September 3rd, 2009. I was at the end of a two-year investigation, trying to determine what was “wrong” with me, so I suppose the glass was a little less than half-full. I was beckoned into my consultant’s rooms, and then everything changed.

My then consultant sat in front of me, clasped my arms in his hands, moved them back and forth and then announced, “Ah yes, you have Parkinson’s disease, but don’t worry, it won’t kill you.” He got up, walked to his desk and started to type on his laptop. “Hang on a minute, I’m 44 not 74,” were the words that just about made it out of my mouth. “Sure that’s nothing,” he said, “I had a patient here last week and she’s 29 and she has Parkinson’s too.”

So ended our conversation, apart from a vague recollection of “ . . . and here’s a prescription” as his voice tailed off, and I stumbled off and out of his presence forever.

The diagnosis I received was Young-Onset Parkinson’s disease. The manner in which I received my diagnosis, or rather the unbelievably unempathetic manner of its delivery, has always bothered me. I now realise my consultant, like many others, was so wrapped up in the relief of finally identifying the illness, he forgot that it would be less than joyously received by his patient.

All too often we get so consumed by our laser-sharp focus on whatever it is we’re focused on, we forget some of the basic language, feeling and insight that is necessary to help others understand. For the medical profession, this often translates as a lack of empathy.

For me, the shock has subsided, the pain has eased, and the disease? Well, the disease introduces itself every morning when I wake. I have come to terms with it and live my life in such a way as to keep the damn thing as much at bay as possible. It’s hard, it’s tiring and some days it’s about a million times more difficult than other days. But it’s in my life now and I acknowledge its presence, while not letting it ever take over. In so many ways, I am lucky to be where I am now as I realise there are many worse things to face. As for my glass half-full, some days it’s completely full. Other days, not. There’s always the next day to look forward to, of course.

Life is busy. This can be difficult for a new vegetarian such as me
3