Why are An Post’s letters about my TV licence so shaming and threatening?

Conor Pope: I hadn’t paid, but is there really a need for all the red ink and capital letters? 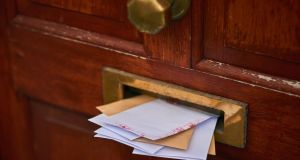 There is nothing pleasing in Conor Pope’s letterbox. Photograph: iStock

The Pope house gets so little actual mail that when something comes through the door it’s a cause of great excitement, not least for the dog who is hardwired to be driven demented by the sound of the postman fiddling with our letterbox.

He is invariably disappointed by what he finds – the dog not the postman, he is simply terrified – and I am similarly let down when I pad slowly and less barkingly down the hall to scan the miserable collection of junk mail and worrying-looking window-enveloped letters for strangers who lived in my house years ago but left without leaving a forwarding address.

I can’t remember the last time my postman delivered something worthwhile or pleasingly surprising to me, but I have no problem bringing to mind all the unpleasant correspondence I get from grumpy utilities, bad tempered bankers and – in recent days – my postman’s employer.

I was a little late paying my TV licence this year and my tardiness did not go unnoticed. In fact it prompted a rash of increasingly unhinged and excessively rude letters from An Post demanding cash with menaces.

The one-way stream of invective started in July when I got a couple of barely civil letters from them as my licence’s expiry date neared. They were followed by an uncivil one within hours of my licence’s due date passing. Its hostile tone was the main reason I held off paying. “Give us our money now,” was effectively what it said.

“Not until you ask nicely,” I muttered to myself as I tossed the brutal demand to one side. If I thought my unspoken protest would soften An Post’s cough I was mistaken and the letter I got last week was ruder still.

It was full of ridiculous red ink and bold type faces AND SENTENCES IN CAPITAL LETTERS warning me of the terrible misfortunes which would be heaped upon my shoulders if I didn’t hand over the cash immediately. It was so full of impotent rage that it may as well have been written by a Twitter troll in need of anger management classes.

To be clear I’m not opposed to the licence fee and while it isn’t something I’ve ever looked forward to paying, I’ve always been happy to pay it because I think public service broadcasting is important and should be properly funded and if a licence fee is what it takes, then so be it.

What I am against is ignorance and rudeness and correspondence from An Post is – generally speaking – both. I was warned that unless I paid up IMMEDIATELY or signed some class of absurd statutory declaration stating that I no longer had a television, I could expect a licence inspector to call round to my house posthaste and if they found a unlicensed telly there I would pay a heavy price indeed.

Of course, An Post – or at least its TV licence section – has form in this regard and for as long as I can remember, it has been bullying and terrifying and threatening to shame the nation in all sorts of ways.

When I was a child, the airwaves were flooded with ads claiming that the licence people prowled the country in high-tech vans with finely tuned antennas which they used to spy on us all. I always imagined them as some class of crappy A-Team and – yes – I pitied the fools.

The vans were – or so the ads claimed – able to detect televisions and match them to licence holders. It was nonsense; there were no such vans and there was no way the licence people could detect whether your had a telly unless they walked into your living room and saw it with their own two eyes.

They tried that too. One of the more enduring memories of my childhood is of a sour-faced licence inspector calling to my house. My poor mother was scared witless and as the clown from the P&T – as it was known back then – stood menacingly in our doorway she ransacked drawers in the living room and the kitchen searching for the piece of paper that would save us all from the gallows or debtors prison or whatever nonsense they were threatening people with at the time. It was a time before mobile phones – or, to be honest, landlines – so she couldn’t ring my dad to ask if he knew where it was. Eventually it was tracked down and the house was able to breathe again.

By coincidence, I needed some information from An Post last week so I wrote what was, I think, a very polite email and sent it to a dedicated email address and waited for a response. Days past and nothing happened. So I sent another letter and it was just as civil. It too was ignored.

Maybe if I wrote to them again and threatened to rain legal hell upon their shoulders and included SENTENCES IN CAPITAL LETTERS shrouded in a blood red box with some underlining it might make a difference. Probably not though – the threat stream only seems to flow one way.

Yotam Ottolenghi: How to turn yesterday’s bread into a feast
7

Put a spring in your step for running in February
9