My 40-year school reunion: We hadn’t changed a bit? Of course we had

We had survived, thrived even, finding our paths through a patriarchal network 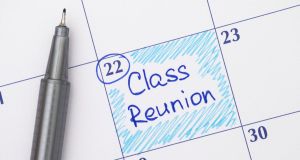 'Those who had married young – often very young by today’s standards – lived in those hopeful, tender, fledgling unions through a bruising, prolonged recession in the 1980s.’ Photograph: iStock

I went to a convent school as a tot, trussed up in a big grey gaberdine coat and a fetching beret.

I spent many a crisp May morning doing laps of the tennis courts, rosary beads in my tiny grip, reciting the decades and worrying terribly about all the undead babies spinning around in limbo on God’s endless carousel, waiting for my fervent prayers to free them from torment.

After a number of years fretting over ghost babies and learning about sugar beet production, the height of MacGillycuddy’s Reeks and the importance of using a hanky, I was expelled by the nuns from their Christian establishment.

It was a private school and my father couldn’t afford the fees – hell, he could barely afford a pint – and so I spent long months at home, me and the dog and the radio and my uncomfortable burgeoning adolescence, wondering if I’d ever go to school again.

In 1979, the year we threw off our school ties and unbuttoned our gymslips, there was limited access to contraception

Finally, my aunt, who was in the nun business herself, got me into another convent school, near to where my parents and I had moved. (The move is a tale I’ve told often, so please forgive the repetition: at the same time as I was expelled from school, the bailiffs also expelled my family from our home, and everything pretty much went tits up.)

Anyway, I began my secondary-school education in the new convent by the sea, trussed up this time in a green gaberdine and bottle-green knee socks. Exchanging rosary beads for a packet of 10 Grand Parade, I gamely trailed around with my new friends in my fisherman’s clogs, smoking and tattooing boys’ names on my leather wristband.

When I try to recall my actual education (which I assume took place), I really only remember a mild interest in the continental drift and being stopped in my tracks by TS Eliot’s The Love Song of J Alfred Prufrock.

I remember being happy though. I remember lying around with my friends, listening to JJ Cale, blowing smoke out the window and wondering what the future held beyond the convent gate.

Recently, about 40 of us from the class of ’79 met for a drink in a local bar for our 40-year school reunion. Nothing major – no speeches, no toasts, no memories of glory or competitive displays of achievement – just a bunch of women whose lives had once crossed, meeting and talking while, outside, night knitted itself around the skeletal masts clanking in the marina.

The idea of getting together had been floated by a couple of the women who stay in regular touch. I bumped into an old friend on the beach who told me about it, and I told someone else; the gathering gathered.

We were schooled in a small community; some never left, others of us have returned. We are, in truth, a pretty homogenous group.

Those who had married young lived in those hopeful, tender, fledgling unions through a bruising, prolonged recession in the 1980s

Late at night, there were a handful of us left sitting in the bar (I knew I’d be among the last to leave), talking about our memories of 1979 and about what Irish society had in store for us, a bunch of teenage girls.

We spoke about doing secretarial courses, about going into nursing, teaching or the bank. One of us had skipped out of the convent gate and into art college; a couple of others had made it to university. I’d become a waitress. A staggering number had married in their early 20s. We were mothers; some were grandmothers.

In 1979, the year we threw off our school ties and unbuttoned our gymslips, there was limited access to contraception. The pill was allowed in Ireland, but only upon presentation of a prescription – and how many 17-year-olds, back in those gypsy-cut days, were confident enough to knock on the door of the family GP with that request?

Those who had married young – often very young by today’s standards – lived in those hopeful, tender, fledgling unions through a bruising, prolonged recession in the 1980s. There was no such thing as paternity leave, while childcare and creches were relatively new developments.

Many remained at home when their children were born. Some marriages survived. Some careers survived too, though a significant number, it seemed to me, didn’t. We found we had reinvented ourselves, survived, thrived even, finding our own paths through a patriarchal network that will soon, hopefully, seem as ancient to our daughters as faded maps of the empire.

We parted on the harbour road. “You haven’t changed a bit,” we said to one another. “Not one single bit!”

But we had. We weren’t the girls we once were, and we were all the better for it.