Róisín Ingle: That’s because their great skill is being organised. Mine is losing stuff 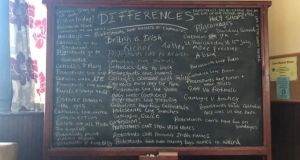 The blackboard from Derry Girls showing the differences between Protestants and Catholics. Photograph: Dylan Llewellyn/Twitter.

Show me the girl at seven, and I’ll show you the woman. I think that’s what the Jesuits said. I lost things as a child. Sometimes on purpose – PE gear, I was allergic to skorts – but mostly by accident. Treasured childhood books. Concert ticket stubs I swore I’d keep forever. Wham! 1984. I blinked, distracted by the next thing, and they were gone.

The art of losing isn’t hard to master. That’s what Elizabeth Bishop wrote in her poem One Art. After decades feeling intermittently not good enough in one way or another, losing stuff is the one thing I wish I wasn’t so proficient at.

Phones. Jewellery. Whole outfits. A father. A husband. A magazine column I wrote about loving Paul McCartney which I got actual, real life Paul McCartney to sign. There it was, gone.

And now, aged 48, a hard drive. A small black plastic box I thought was in the attic, aka the roofspace. I live with and love a Northern Irish Protestant, and he calls it the roofspace.

I had a craving to liberate the photos, to make something solid of the digital memories

I have to thank Derry Girls writer Lisa McGee for explaining a lot of our cultural differences on one handy blackboard in Season 2 episode 1. His mother Queenie keeps her toaster in the cupboard when not in use. I didn’t know this was a Protestant thing until Derry Girls.

“Why would you keep the toaster out when you are not using it?” asks Queenie, who hasn’t seen Derry Girls. Because it’s an extra job to put it back, I suggest, although from my observations, the Northern Irish Protestants in my life get a buzz out of giving themselves more jobs to do. The devil makes work for wee hands that are too lazy to put the toaster back in the cupboard, so he does.

I thought the hard drive was in the roofspace but in yet another round of decluttering, we have taken every single thing down. The front room looks like the White Elephant stall at a really dodgy church fete.

It’s not there. It’s gone. And I’ve cried, actual tears, but that didn’t bring it back. The hard drive contains every photo, every video I took of the first five years in the lives of my twin daughters.

As I’m mourning the hard drive, my brother Eddie calls over for a slice of lemon polenta cake and a game of Bananagrams

It feels like I’ve thrown half their lives away.

I had started looking for the hard drive because I had begun to be consumed by the idea of the hundreds (thousands?) of images locked away in that rectangle of black plastic.

I had a craving to liberate them, to make something solid of the digital memories. I wanted to create physical photo albums, like the ones people used to have on the shelves, the ones taken down and pored through when visitors came. Sacred family collections that took time and care to assemble.

I had great plans for the content of that hard drive. I would also edit the videos, make mini-movies for their future selves and their future grandkids. I’d be that kind of mother for once. The good, thoughtful, organised kind.

As I’m mourning the hard drive, my brother Eddie calls over for a slice of lemon polenta cake and a game of Bananagrams which, when I write it down, sounds deeply Protestant.

I tell Ed about it and he tells me about the time he accidentally left his work laptop on the roof of his car the way some people leave a cup of coffee, before speeding off down an American highway. He tells me about the moment he heard the noise of his laptop slamming onto tarmac. It took nine months before the knot in his stomach went away. And that was just work stuff.

This is not work stuff. Will the knot take nine months or nine years to unravel? I don’t know. But my friend’s father Des is in hospital. We go to visit him on a bright Sunday in January. My daughters sing Litany to the Holy Spirit while a nurse called Flo tends to Des.

“When I lie within my bed,/ Sick in heart and sick in head,/ And with doubts discomforted,/ Sweet Spirit, comfort me,” the girls sing.

But at home in the kitchen I cry about all the moments that have been lost with the loss of the hard drive. “We’re here now,” they say, one either side of me, warms hands around my neck, stroking my hair. Doubts discomforted.