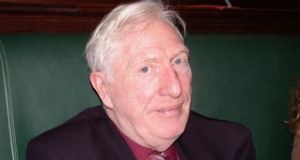 Gerry O’Flaherty: one of the principal organisers of the First International James Joyce Symposium, held in Dublin in 1967, a crucial moment in the promotion of Joyce’s work both here and globally

‘He loved literature, he loved Dublin, and most of all he loved his family.” This was all that Gerry O’Flaherty, who has died aged 86, allowed as eulogy at his strictly Latin Mass funeral.

Touching as it is, it falls some way short of describing his impact in the first two areas mentioned. He didn’t just love literature, he actively served and promoted it, especially the work of James Joyce. (It was typical of this complex man that while a very devout and observant Catholic, he had absolutely no problem with any aspect of Joyce’s work, except perhaps some of the denser parts of Finnegans Wake, with which he sometimes allowed himself to express impatience.)

Gerry was one of the principal organisers of the First International James Joyce Symposium, held in Dublin in 1967, a crucial moment in the promotion of Joyce’s work both here and globally. With none of the principal Irish academic bodies particularly interested, Gerry and a small band of fellow enthusiasts took it upon themselves to set up this venture; it was largely thanks to him that it happened where it needed to happen, in Dublin, and not in, say, Tulsa, Oklahoma, as it very easily might.

And even though the symposium received mixed reviews, at best, in the Irish media, Dublin’s foundational importance in Joyce’s work had been fully established. He was also heavily involved in organising the next symposium, in 1969, again in Dublin, thus establishing it as a biennial event, which it remains.

Then, in the early 1970s, Gerry was a founder member of the James Joyce Institute of Ireland, the first body in the city dedicated to the study and promotion of Joyce’s works. It gathered weekly in Newman House on Stephen’s Green (later in the James Joyce Centre) where a band of enthusiasts applied themselves diligently, but also with much laughter, to the texts of the master. Noted – and genuine – Joyce scholars such as Roland McHugh and Vincent Deane found it a nurturing environment where they could develop their interests in a receptive setting.

And to those who were setting off on an involvement in the Joycean world, Gerry was encouraging and supportive – not just morally but with active assistance.

His backing and belief were hugely inspiring. The James Joyce Institute still exists, now based in the James Joyce Centre, and its survival – going on to 50 years – is a testament to the depth of Gerry’s love for this quintessentially Dublin author.

Again, to say he loved Dublin is a considerable understatement.

His knowledge of the city and its history was encyclopaedic and formidable. This was befitting for someone born in Crampton Court, in the very heart of the city. Many books of annotations of Joyce’s work owe their Dublin material – where it is right – almost entirely to Gerry’s input. (Where it is wrong they obviously didn’t bother to ask.)

He is thanked for assistance as far back as Richard Ellmann’s famous biography, which first appeared in 1959. He produced a book, The Book of the Liffey: From Source to the Sea, with Elizabeth Healy and Christopher Moriarty, in which he managed to incorporate many Joyce references. An active member of the Old Dublin Society, he gave talks and contributed to their journal, the Dublin Historical Record. He was also involved with the Dublin Magazine, being assistant to the editor, Rivers Carew.

In later years, Gerry’s love of literature, Joyce and Dublin received a new outlet when, with the encouragement of former head of news Ed Mulhall, he began broadcasting on RTÉ.

With his beautifully modulated Dublin voice, he first took part in a series of radio programmes based on the rebroadcasting of RTÉ’s celebrated reading of Ulysses.

In these, he discussed episodes of the book with his friend Fritz Senn, the eminent Zürich-based Joycean, who himself turned 92 at the start of this year.

He then broadcast several pieces about Dublin on RTÉ television in a series called Capital D, later folded into Nationwide, following the Six One News. These included a programme on the Dublin institution of Mount Jerome Cemetery. He also took part in a programme dedicated to the friendship between him and Fritz. It included footage of Gerry for the first time at Joyce’s grave in Zürich (he didn’t seem to mind having to travel to Zürich to see it) and it was a moving moment.

Another nonagenarian, the poet Thomas Kinsella, a fellow Dubliner to whom the city greatly matters, was the subject of a programme with Gerry which delivered special insights into the poet and his world.

Gerry combined all these interests with an active career in publishing, editing and the civil service, in the then An Foras Forbartha.

But there is no doubt that the three concerns mentioned at his funeral were indeed the dominating motifs of his life. Gerry’s life was exemplary in his dedication to all three. And the importance of the third of them, his family, his wife Lelia, his children Owen and Ellen, to him was very evident, despite the innate reserve of this very private man. “Dublin made me.”