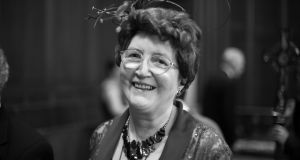 The accomplished academic and acclaimed scholar of 19th century French literature and paintings, Barbara Wright, has died following a short illness. One of the first four women to be elected into the fellowship at Trinity College Dublin (TCD) in 1968, Wright went on to become professor of French literature at TCD for almost three decades.

She was a world expert on the 19th century French painter, novelist and art critic, Eugéne Fromentin, publishing a 20th century scholarly edition of his novel, Dominique (1966), comprehensive catalogues of his paintings with art historian James Thomson (1987, 2008) and a biography: Eugéne Fromentin: A Life in Art and Letters (2000) which was translated into French in 2006.

The only child of William Edward Robinson and Rosaleen Robinson (nee Hoskin), Barbara grew up in Terenure, Dublin, and attended Alexandra College. She then studied French and law at TCD.

Her interest in Fromentin began with her PhD on the French writer and painter at Cambridge University in England. He remained the central focus of her research throughout her life but she also explored the connections between literature and painting in 19th century France through other writings and literary correspondence of that era. Fromentin’s home town of La Rochelle in France made her an honorary citizen.

Throughout the 1960s, Wright held posts at the University of Manchester and Exeter and then at TCD. In 1961, she married William (Bill) Wright, professor of engineering at TCD. The family lived on Palmerston Road, Rathmines, where their only son, Jonathan, was born and grew up. He is now a professor of economics at Johns Hopkins University, Baltimore, Maryland, in the United States.

Wright was appointed chair of French literature in TCD in 1978. During her time there, she served as dean of the faculty of arts (letters) for nine years, fostering new undergraduate degree courses in languages combined with law, computer studies, linguistics and business studies. Roger Little, then professor of French at TCD, said that Wright recognised languages as key to future opportunities in Europe. She was a determined and skilful administrator as well as an assiduous scholar and much appreciated lecturer at TCD. A talented pianist, she was also involved in setting up a joint degree in music education between TCD and the Royal Irish Academy of Music.

In 1985, with colleagues from TCD, she helped establish a joint Masters of Philosophy in textual and visual studies with Universite Paris 7. The Free University Amsterdam later joined this masters programme. In 1995, Wright was awarded the rare distinction of a higher doctorate (Litt.D), an honour that is bestowed on academics by an international academic jury based on the calibre of their published works.

Following her retirement, Wright continued to pursue scholarly matters for the Modern Humanities Research Association. These included publishing new editions of work by Narcisse Berchére and Albert Aubert, and editing works by Gustave Drouineau and Edgar Quinet – all French 19th century writers. In 2018 with Jane Conroy, she presented her study of France and Ireland in the late 18th century: The Correspondence of Charles Coquebert de Montbret and Andrew Caldwell, 1791-1803.

Her awards included the French distinctions of Chevalier de l’Ordre National du Mérite in 1975 and in 2019 the Chevalier de la Légion d’honneur, which is the highest French order of merit. She was also made an honorary fellow of the Royal Irish Academy of Music in 2012.

Diagnosed with a brain tumour in May 2019, she embarked on what was to be her final work – the editing of an unpublished manuscript by 19th century Normandy nobleman, Edouard de Tocqueville (brother of Alexis de Tocqueville, author of Democracy in America) about his travels around Britain and Ireland in 1824. She worked with great enthusiasm on this project, entrusting colleagues in Ireland, France and the Netherlands to see the project through to publication by the Paris-based Editions Honoré Champion.

Barbara Wright is survived by her son, Jonathan, his wife, Krista and her grandchildren, Maximilian and Alexandra. Her husband, Bill, pre-deceased her in 1985.