Hilary Fannin: I feel as if I’ve been watching Dublin’s coastline change forever 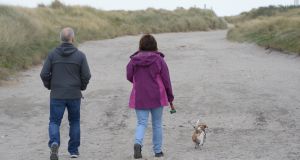 The beach, like everywhere else around here, holds history for me. Photograph: Alan Betson

Day 9,999: The newly arthritic cat is sleeping in a raft of sunshine, the wild garlic that rampages around my path is threatening to subsume the well-tended neighbouring gardens, and, at this stage of the Covid game, I’ve almost forgotten what it’s like to be ignored by a barman.

A shy female garda stopped me in my seagull-shit-stained car on the way home from the beach the other day. Traffic was streaming in both directions from the crossroads, sunlight glinting off the metallic carapaces of many a fine vehicle. I live down the road, I told her, naming my estate. And it’s true: I’m lucky enough to live within 5km of a beach that I walk on year-round.

Sometimes I step over driftwood in the wake of a dissipating gale, sometimes I wrap up in layers of wintry insulation, sometimes, as recently, I take off my runners and paddle in the shallows. The garda waved me on; she’d bigger fish to fry than a sandy old girl in a jalopy.

My spouse smiled, albeit a tad ruefully, the mother made don’t-be-silly-hurry-on mother-type sounds, and the baby, having delivered his innocent verdict, plodded on

Earlier that day, walking on to the beach with my unarguably silver-haired spouse, we were spotted by a sturdy toddler who, dragging a plastic spade, was reluctantly leaving the seaside with his mother. His fat, brown, edible-looking feet plodding through the fine sand, he looked up at us. His aquamarine eyes were the same colour as the sea, hazy that day under a granulated sky.

“Oh,” he said, stopping in his tracks. “Oh no! Look at that old man!” And his tone was brimful of sorrow and surprise, as if nature had done something entirely unexpected, as if it had turned a silk purse into a sow’s wrinkled ear.

My spouse smiled, albeit a tad ruefully, the mother made don’t-be-silly-hurry-on mother-type sounds, and the baby, having delivered his innocent verdict, plodded on.

As we walked to the shoreline, it occurred to me that the toddler, whose barely used world must be reborn anew every day with sights and sounds and sensations never before experienced, probably hadn’t seen anyone much over 30 since lockdown began and the old folk got mothballed.

It wasn’t long until low tide. We put our shoes in our pockets and waded into the water, walking right out to the sandbank to watch the commerce of the seabirds. That sense of being at best superfluous to nature is a constant now in these fallow days. Under the silent airport flight path, among the terns and guillemots, the black-headed gulls and cormorants, our footsteps were temporary signatures sinking into the wet sand.

The beach, like everywhere else around here, holds history for me. I had a friend who lived in a fine, spooky old house that backed on to this shore – long since demolished to make way for a celebrity fortress.

As little girls we used to hide together, crouched down on the steps at the turn of the old wooden staircase, while our parents partied. Drinking in all the lipstick-stained rage and gin-soaked regrets of our unhappy guardians, we were witnesses of a nocturnal world that sang to the tune of bitter whispers and hissed accusation.

I watched families arriving for the day, carrying their (possibly illegal) picnics, their excited children running towards the receding tide, indifferent to the backdrop of wealth and privilege

In the mornings we would run down to the beach with my friend’s Sindy dolls and make homes in the dunes, populating our sandcastles with golden-haired thoroughbred dollies who hissed and raged and flung their detachable plastic arms around.

I remember my father among a group of hacking-jacketed clay-pigeon-shooting men on the strand. I remember being frightened that we would be found out, he and I, interlopers in this monied world, because I understood from a young age that, unlike his chosen cohort, we didn’t have the means needed to conquer this coastline, to live in full view of the big grey sea, to claim this geography for ourselves, to squat on something so stupendous and call it “mine” or “home”.

Released from the tension of childhood, I look with equanimity these days at the extravagant houses along the beachfront, some on stilts, others spreading out like sated cats over the dry ground.

I watched families arriving for the day, carrying their (possibly illegal) picnics, their excited children running towards the receding tide, indifferent to the backdrop of wealth and privilege.

I feel as if I’ve been watching this coastline change forever; in these heightened times, when we are so entirely subdued by nature’s whim, it’s easy to feel like one of those dollies on the sand, a plaything.

Easy, too, to wonder how much longer the sea might allow these lovingly constructed sandcastles to survive.

Michael Caines: ‘You’re hanging upside down and you see a hand, lying there, and your arm’s gone’
3

In Irish orphanages, being ‘coloured’ was a defect. I wish Mam had lived to see Black Lives Matter
6