A note pinned to the boy’s back read: ‘Please look after Billy. He has no home’ 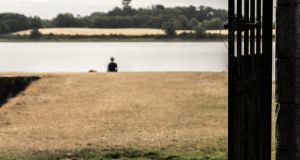 Finding our way to the new normal – whatever that is. Photograph: iStock

Day 999, again, and now there’s the added pressure of the hardware stores being open and all those pots of magnolia waiting to be slathered over the hall stairs and landing.

I don’t know about you, but as the days accumulate and the sun intrudes on best-laid plans, I feel less and less inclined to spruce up anything at all – and I include myself and my handsome new beard in that statement.

It’s not just a putative passion for DIY that’s gone out the grubby window; it seems to me that the bellicose language we once adopted in relation to the pandemic has receded too. There’s less battling and blasting, annihilating and conquering, triumphing and stamping out in evidence these days, both conversationally (at the required social distance, of course) and in the acres of available news coverage.

A baby girl who’d been left in the back of a taxi near Charing Cross was named Mary Cross. A man named Victor Banks had been found as a tiny baby on Victoria Embankment

Instead we’re stealthily being encouraged to adapt to a new dispensation, a new set of rules. Looks like we’re all going to have to put on our party frocks and “pivot” towards the new normal, whatever that overused verb means now.

I’ve been thinking about resilience and adaptability a lot this week. I’ve been reading an account of a fractured childhood, a personal history written a couple of years ago by my London-based brother-in-law, Peter Lindley, who is currently locked down in Brixton, going for early-morning walks in his local park and not sitting on the prohibited benches to admire the entirely unfettered ducks.

As a small boy, estimated to be two years old, Peter was found abandoned on a bombed-out street in south London, towards the end of the second World War. He had a note pinned to his back that read: “Please look after Billy. He has no home.”

The book – part memoir, part social history – is the anatomy of a search for identity. Telling not just Billy’s story (one of being moved around a succession of children’s homes in the postwar years, of having what little was known of his past, including his name, obliterated), the book looks, too, at the lives of his fellow foundlings, the often forgotten victims of political convulsion.

Peter writes movingly about the orphaned and abandoned children he met during his research, whose identities were randomly selected, as if in a sort of parlour game, from the places where they were found. A baby girl, just a few hours old, who’d been left in the back of a taxi near Charing Cross, was named Mary Cross. A man named Victor Banks had been found as a tiny baby on Victoria Embankment.

Many of these abandoned children were randomly distributed, too, to unsupervised foster and adoptive families.

Heralded by an increasingly overwhelmed system as a strapping, ruddy-faced child with musical potential, Peter was subjected to several failed attempts at fostering. One family promised him a bus ride – a treat for the little boy in those hollow years – but when the bus stopped, he realised it was outside the children’s home he’d been taken from just days earlier after being “chosen for a new life”. His foster father hopped off the bus, left Peter at the gate, then hopped back on again before the bus took off.

Afraid to admit to hunger because he has once been complimented for his sensible dinner-table reserve, he sits and watches the other children eat. Afraid to get out of bed to use the toilet, he lies awake until morning

Finally settling down, albeit with difficulty, as a late third addition to the family of a couple in Somerset, he attempted, as a six-year-old, to adapt to a brand-new world, a brand-new set of circumstances, a process he describes in a way that chimes somehow with these times.

Imagine, he invites the reader, that you have arrived late at the cinema and that you yourself are part of the on-screen story.

It is in the tiny unfamiliar details of his new life, a life that is second nature to his adopted siblings, that he feels himself most alone, most adrift. Afraid to admit to hunger because he has once been complimented for his sensible dinner-table reserve, he sits and watches the other children eat. Afraid to get out of bed to use the toilet, he lies awake until morning.

Peter did adapt, though, and grew into his own story, an award-winning documentary editor with children and grandchildren of his own.

The book ends without the answers he might have been seeking, but the journey brings him at last back to the little boy alone in the rubble, the boy whose identity he reclaimed, the boy Billy whose memory Peter was finally able to protect.

I suppose we’ll all get there in the end, all somehow find our way to the new normal.

If you get there first, mine’s a gin.

What will reopened childcare centres look like to staff and to children?
3