Sean Moncrieff: Why does the sight of me in a dress bother people? 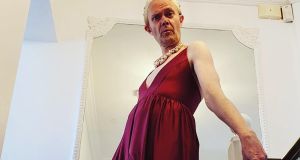 By any metric, I don’t look good in women’s clothes. But that was the point of the exercise.

A while back, I participated in an event called Formal Friday, which aimed to raise funds for frontline workers. The idea was that people at home or in work get dressed up in fancy clothes for the day and, more importantly, donate money.

This presented a problem for me. Despite the worthiness of the cause, it smacked of fancy dress, of organised fun. As I’ve written here before, my strict regimen of philosophical grumpiness precludes me from taking part in anything like that.

Luckily – here’s a sentence I never thought I’d write – there was a worldwide pandemic keeping everyone indoors. Participation mainly involved sticking a picture of yourself on social media. I didn’t have to spend the whole day dressed like an eejit: the eejity section would last as long as it took to put the clothes on and take the photo.

I was just going to throw on the suit I keep for dinner-dances and court appearances, but Herself suggested that if I was going to be ‘formal’, I might as well grit my teeth and lean into the ‘fun’. She suggested I wear something of hers.

With an unsettling level of enthusiasm that we still have to have a serious talk about, she put me in a dressy jumpsuit, a necklace and a headband thingy. I stood at the top of the stairs, did my best duckface, posted the picture and 10 minutes later it was all over.

By any metric, I don’t look good in women’s clothes. But that was the point of the exercise. (The fact that I could fit into Herself’s glad rags is a side issue and one which she will eventually come to terms with after she’s received the necessary psychological help).

Nonetheless, the reactions to my five minutes as a drag act were fascinating. One chap on Twitter exclaimed that he “wouldn’t be surprised” because of the “agenda” I push, while several others – clearly with some expertise in the matter – discussed how I hadn’t properly prepared my body. I don’t need to go into details, but the word ‘tucking’ was used a lot. And I now know what the eggplant emoji means.

But apart from these, every single reaction – and it ran into hundreds – fell into two main categories:

1)People who went along with the joke: ‘you go girl’.

2) People who feigned disgust: ‘I can’t unsee that’.

This isn’t about transvestitism or being trans. I’m neither, and anyway, I take the weekends off from pushing my agendas. It’s simply about what clothes we are and are not allowed to wear, and how we interpret that.

Women routinely wear trousers now, but that only became acceptable in the mid-20th century. Prior to that, the sight of a trousered woman was considered unacceptable and unnatural.

Today, the sight of a man in a dress might prompt a similar reaction, but one that is not always vocalised: that ‘man’ might identify as female or be a cross-dresser. So, we don’t say it out loud. We don’t want to appear intolerant.

However, when a pin-up for cisgender, heterosexual virality such as myself decides to don a frock, those fears and prejudices can come pouring out. The word “disturbing” was much used by the category 2 people. A few begged me never to do it again.

I’m not claiming that the category 2 people were bulging with barely-contained bigotry. I get why they may find the picture disturbing. I find it disturbing. But perhaps what that reveals is that prejudice – mine and yours – isn’t always that easy to escape. We can’t just switch it off. It takes work.