Dad on the warpath in his Y-fronts

Family Fortunes: Jokes and japes at bedtime with my brothers 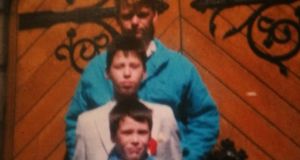 ‘Once upon a time, I shared a room at home with my two younger brothers’ – Trevor Garry (top) has fond memories of that time.

Once upon a time, I shared a room at home with my two younger brothers. To say bedtime was fun would be an understatement along the lines of George Best had a good social life.

As the eldest, I would chair the zany conversations and set the agenda. Bob Geldof figured prominently around Live Aid. We would discuss the great man at length and try to understand why he had dirty hair.

The jokes and japes were constant, with the hysterical laughing often reaching fever pitch. Fictional characters were invented by myself for my own amusement and the two lads naturally assumed these people were real.

Vile-tasting coffee biscuits were administered as a punishment to anybody who questioned the chair – all taken in good spirits, of course. However, the fun was curtailed once the folks decided to go to bed.

Dad would try to keep the lid on the noise in order that they could get some sleep. Wishful thinking. Countless journeys were made by Dad from his warm bed into our room to tell us to pipe down, all to no avail.

The highlight and the most vivid memory I have of one of these visits is still talked about these days. One night we were up to our usual shenanigans, while the folks were in bed. It must have been Dad’s fourth attempt to calm the troops, as he burst through our door looking for middle brother, Paul (the most vocal).

This time Paul had mischievously hidden behind our door

Whenever we heard Dad’s footsteps getting out of bed, we would announce the word “undies!” in unison, as a reference to the Y-fronts Dad wore “Tarzan-like” on arrival. This time Paul had mischievously hidden behind our door.

So when Dad came through the door and flicked the light switch, he saw Paul was not in bed. As he turned around to investigate, Paul leapt out from behind the door to deliver an earth shattering ‘BOOOOO !!!’ into Dad’s face.

Pandemonium broke out in the room, with the giddiness now up to 100 on the giddy-ometer. Poor Dad. So, as I look back now as a father of two boys (nine and 13), I count my blessings that they each have their own room. But sometimes I reflect that they are missing out on a little part of growing up that I had, which they will never experience. Coffee biscuit, anyone ?