I can’t bear the clipped, barbed emails that fly at you like serrated gnats 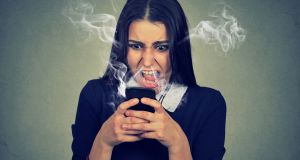 I long for a time when a written request for a spreadsheet at 11pm would be met with its only proportional response – the challenge of a duel-by-sword combat. Photograph: iStock

Our interaction with the world is largely in written format. Apart from the hours we waste gawping with slack jaws at Instagram photos of other people’s lives, which are about as reflective of reality as an episode of Love Island, we spend huge quantities of time reading.

Quantity is the operative word, because we are reading bilge. Bilge such as captions under photographs hashtagged “Live Laugh Love” or Twitter posts insinuating that Toffee Crisps are actually a Russian mind control device. Bilge, depending on where you stand, like this column (thank you for your sweet, sweet clicks either way. They keep me in Toffee Crisps and other essentials).

So much of our day is conducted in a digital realm. Even if you set social media aside, there are the emails. Oh, the emails. You plough through them all day, with Sisyphean effort, and then you get up briefly to go and empty your bladder, taking your phone with you, you animal, so that you can despair over whatever Trump has most recently tweeted while passing water (you, but maybe also him). When you return to your desk, you will have no fewer than 7,000 emails waiting for you, all marked urgent, none actually urgent.

I am playing the role of adult lately, working in an office, but I don’t entirely fit in. Earlier this week, after a colleague described something as important when she and I and everyone else traversing the globe knew it wasn’t, I replied that we were both dying even as we stood there on the drab grey carpet, losing ourselves in admin.

“Dying. That’s important,” I said knowingly, leaning forward in a way that probably looked, in retrospect, mildly insane. She excused herself and I saw her moments later working her way through her emails, an anaemic serving of tea sweating into a paper cup in her hand.

I returned to my desk and resumed the important task of dying slowly along with everyone else.

I can’t bear the emails, is my point. It isn’t the job – emails are part of almost any job. They are ubiquitous and constant. I long for a time when a written request for a spreadsheet at 11pm would be met with its only proportional response – the challenge of a duel-by-sword combat.

We persist in this digital, metaphysical realm, and I don’t know the rules of etiquette any better than I know the ones in the physical world.

One thing is for sure – we all know a rude email when we get one. Not quite abusive. Any journalist worth their salt has answered a couple of those with forced politeness seething through gritted teeth in their time.

Hello, by the way, to the woman who emailed me a number of years ago after reading a column I had written, to tell me that she has never encountered a more stupid person in all her life. I did not say so at the time, but I thought that really she should get out and about more, and if I’m being honest, I still think so.

It’s the brusque emails. The clipped, barbed little ones that fly at your face like serrated gnats one after another. They consist only of one word or short sentence. I got one earlier this week from someone I certainly don’t know well enough to take such liberties that simply read, “ . . . Update!?”

There are some people who, hiding behind words such as “efficiency”, become digital solipsists, sending these sorts of barbarous nouns, unflanked by any softening adjectives, unaccompanied by any reassuring verbs, out into the digital ether in the belief that the being who answers from the void (me) cannot possibly be a flesh and blood creature like themselves, dying slowly two desks or a continent away.

I am reminded of Romeo and Juliet’s Friar Laurence, that great bridge builder, poetically chastising the kin of the two young lovers after they lost their lives to the feud between their families.

“Were you all [I’m paraphrasing] dragged up?”

I implore us, as our email inboxes erode our spirits, to buff the callous edges off our own correspondence before flinging it through the digital wasteland directly into the face of somebody else.

‘As we raised a toast, there was no talk of lockdowns or the distance that separated us - just the four of us ‘together’ again’
9

Christmas dinner: Tips and shortcuts from the experts
Real news has value SUBSCRIBE