Distracted at work, I missed a message from a family member with mental health issues 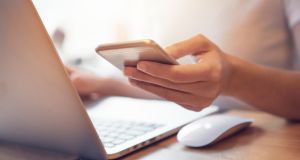 This week, because I was distracted at work, and prioritising the wrong things, I missed a message from a family member reaching out with serious mental health struggles.Photograph: iStock

Taking responsibility is something that most of us are far better at in theory than practice. Most of us believe that, if it’s clear (or someone can prove) that we have done something wrong, we’d have the decency and strength of character to take ownership of it and see our own wrongdoing.

Consider, though, the last time that you messed up. Not a mild mistake or a misjudged moment of selfishness, either – a really bad one. Something that you feel terrible even recalling in memory.

Did you own it completely, without appealing to circumstances, or did the small, chicanerous voices quibbling in your head come out of your mouth to appeal to circumstances, or suggest that your behaviour was partially someone else’s fault? That is an instinct so many of us have.

I haven’t found myself painfully at fault in a while. I’m wrong often, and as bristling with flaws as everyone else, but I haven’t really hurt anyone I care about – or anyone at all, I hope – in a long time.

This week, because I was distracted at work, and prioritising the wrong things, I missed a message from a family member reaching out with serious mental health struggles. It wasn’t intentional, but it does reveal where I put this person on my list of priorities in that moment. I didn’t know they were vulnerable. I overlooked them.

They don’t usually share that sort of information with me, so I wasn’t looking for it, and my eyes slipped over their message without reading it. I forgot to check back later, and the message sat in my message inbox, marked read, and unanswered.

Today, another member of the family, to whom I’m very close, contacted me, furious, because the person who reached out told them they had contacted me to share how low they were feeling, and that I had seen the message but ignored it.

Anyone who has been around depression will know how vulnerable depressed people can be, and how difficult that is to share. Being ignored is probably the most damaging, hurtful, depressed-worldview-affirming response a struggling person could possibly be insulted with.

Apart from all of that, it is dangerous; confirming in the mind of someone who doesn’t feel cared about that they really aren’t.

In his satirical The Devil’s Dictionary (1906), American writer Ambrose Pierce described responsibility as “a detachable burden easily shifted to the shoulders of God, Fate, Fortune, Luck or one’s neighbour. In the days of astrology it was customary to unload it upon a star.”

As I realised and then thought about what I had done through the day, something in me fought to shirk just a little bit of the responsibility that felt so gnawing and horrible, like a vortex at the centre of my torso, spinning and sucking my breath into its void.

My brain said ‘I was busy at work when I got the message’. ‘I hadn’t realised we were quite that close’. ‘I had my own life stuff that was on my mind at the time’.

What I did revealed something in me that needs work, and a lot of it. Something uncaring, or at the very least, selfish. It frightened me to see it there, reeking forth from somewhere deep, spoiling the vista I thought I had painted of my character, telling me that I might not know myself after all.

I apologised unreservedly. There is nothing else for it, and nothing to hide behind. The apology might not be accepted, and I might have damaged more than one relationship. If that happens, it will be a reasonable consequence of my behaviour, and I’ll accept that too.

Sometimes, things that happen are completely your own fault, and this is one of them. I can only carry this feeling forward and make sure that I never, ever lapse in my duty to those around me like this again.

I can be grateful to the person I wronged for teaching me something important, and try to help them now.