Jennifer O'Connell: We all love our kids, but had we forgotten how to enjoy them? 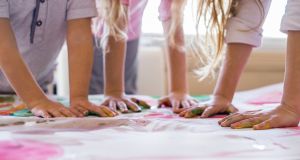 ‘I’m not advocating skiving during this period of enforced togetherness, but we all have to take breaks. Those breaks could be used as an opportunity to remind ourselves of what matters. And how much fun hanging out with children can be. Photograph: iStock

I spotted a headline during the early hours of lockdown last week. “Could squatting in the office save your life?” it read.

It’s a sign of these troubled times that I assumed it was another piece about how to get through the next few weeks of enforced close contact with your nearest and dearest, and enforced distance from everyone you might secretly prefer to spend time with.

Nope. The article was about literal squatting – as in the sitting position beloved of toddlers, Pilates instructors and Tanzanian tribes. It’s the new standing, apparently.

It is a truth universally acknowledged by parents that the days are long and the years are short. Each day is now 118 hours, and counting. And that’s just the hours between breakfast and bedtime.

I decided then that I would try to look on this enforced period of togetherness as an opportunity to make the most of my children again (in between deadlines, and occasional desolate periods of existential dread muttering “I can’t do this” into the bathroom mirror.)

Here’s a thing that you might not hear too often from a parent of my generation. I really like my kids. We all love them, obviously, but I sometimes feel we’re part of a generation that has forgotten how to enjoy them. We became parents at a time when “parenting” was just beginning to emerge as a verb. It’s even more than that – it’s an all-consuming identity, an exhausting bloodsport, a proclamation of your beliefs and tribal identity. As a new parent, I experimented with advice from all the so-called experts. The methods varied, but the messages were the same. There’s no way you’ll manage this by yourself. Every instinct you have is wrong. Follow these rules, or your child could grow up to be Boris Johnson. We internalised all the messaging that parenting is savagely hard, unrelentingly miserable, with little prospect of reward if you get it right, and potentially devastating consequences if you don’t. (Granted, in the early years that’s pretty much spot on.)

But once they can string a sentence together and make you their actual slave, it gets exponentially easier. The urgent, terrifying, all-consuming need they had for you becomes an urgent list of things they want from you. Somehow, that’s more manageable.

Maybe because we’ve spent far too many of our children’s early years separated from them by a screen, I think some of us may have forgotten how much fun it can be; how hilarious and ridiculous and thoughtful and brilliantly capable of living in the moment children can be.

There’s a raft of evidence to show that many parents spent a large chunk of their children’s early years grappling with a constant, low-level unhappiness. One study last year found that working mothers with two children are 40 per cent more stressed than anyone else. A 2004 study by the Nobel Prize-winning behavioural economist Daniel Kahneman of American women in the US found they preferred housework to caring for their children.

Yet, in all the years I’ve been writing this column, the most poignant letters I’ve had are the ones from parents – of both sexes – whose children are now grown, and who long to have even an hour of that time back. I wish I’d just made time to play those games of Monopoly and help him with his Lego, one man said sadly, of his now-grown son. But work always seemed so much more urgent.

If there’s one thing that I’ve learned, it’s that work will always seem more urgent. But it’s rarely more important.

If you don’t have any of your own, there’s probably a child in your life you can borrow, for brief stints

To be clear, I’m not advocating skiving during this period of enforced togetherness, but we all have to take breaks. Those breaks could be used as an opportunity to remind ourselves of what matters. And how much fun hanging out with children can be. If you don’t have any of your own, there’s probably a child in your life you can borrow, for brief stints – a healthy two metres apart, bookended by handwashing – in the fresh air. Their parents might be extremely grateful.

Without children, things we might be less inclined to do include playing board games; reading David Walliams; reluctantly agreeing to a pet, and then falling in love with it; marvelling at bubbles; telling Knock Knock jokes; making someone laugh so hard they fall off a bench; painting; jumping on trampolines; learning what a Minecraft server is; trying to explain in words how to tie a shoelace. Just being in the moment, which is probably the most important thing small humans do better than anyone else. It would take a braver woman than me to jump on a trampoline after three children. But you get the point. Even in these heart-stoppingly anxious times, there’s still joy to be found out there. You just have to be open to it.

Working from home could save you 8 weeks and €3k a year, and halve your transport footprint
6

How clean is your bed?
8

Kathleen Watkins: ‘Occasionally I find myself talking to Gay in my head’
10

‘When you do put your clothes back on, you’re changed’: The nudists of Killiney
Real news has value SUBSCRIBE