Jennifer O’Connell: Why are women in midlife so unhappy? 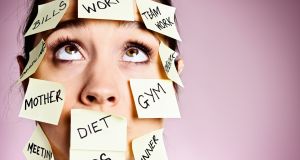 ‘We focused on trying to have it all: to be nice and successful and kind and assertive and loving and financially independent and a present parent and a desirable partner, often all at once. No wonder we’re shattered.’ Photograph: iStock

The five-year-old is in the bathroom, door open, as she maintains a running commentary on the reason she didn’t get time to eat her sandwich, and why her finger hurts, and where she thinks her bunny rabbit could be hiding. I answer with what I think are the right sounds at the required intervals. There is a brief respite, and then her voice comes at me again.

“Are you on your phone again?” she calls suspiciously.

I slide it face down across the table. “I knew it,” she says triumphantly when she emerges, wiping her damp hands on her trouser leg.

The 12-year-old looks up from his book and briefly considers this. “It’s more than she over-pronounces every syllable, like she’s really thinking about what you’re saying, but she’s not listening. That’s her phone voice,” he says thoughtfully.

It is news to me that I have a phone voice. My mother had one too, when I was growing up, but hers was the very grown up way she would pick up the rotary telephone and say “Hello74693whoisspeakingplease?”

My phone voice is different. It’s the one that tells my children “My body is here, but my mind is elsewhere”. And now the knowledge that I have a voice like that is yet another thing I have to add to the ever-extending list of ways in which I am slowly failing at the important things in life.

We’re not boomers. We’re not millennials. We’re the in-betweeners. So boring nobody ever bothers to write articles about us

I hardly even notice it anymore; the crawling, aching guilt is always hovering just over my shoulder. It’s the feeling that has dogged much of my adult life; the certainty that, whatever I’m doing, I’m letting someone somewhere down.

The writer Ada Calhoun has diagnosed this as a generational angst, particular to women. In her book, Why We Can’t Sleep: Women’s New Midlife Crisis, Calhoun set out to find out why women in their 30s and 40s are “exhausted, terrified about money, under-employed, and overwhelmed”. And you thought you had problems.

We’re not boomers. We’re not millennials. We’re the in-betweeners. So boring nobody ever bothers to write articles about us. Millennials have their climate anxiety and their avocados. Boomers have their suspicions and their big saloon cars. Generation X has our guilt, our fatigue, our distraction, our low-grade, boring misery.

Calhoun puts some of this down to our upbringing. We are the last of the children of benign neglect. We grew up at a time when our parents weren’t breathing down our necks, monitoring our activities and our moods, or making our decisions for us. In many ways, it was an incredible freedom that our own overscheduled, micromanaged children won’t ever know.

Calhoun’s focus is on American women, and she interviews 200 of them, and hears stories of unhappiness, and resilience, and humour. But I think Irish women are a more interesting case. We are the products of the bizarre, bipolar condition of growing up in Catholic Ireland against a global backdrop of an emerging feminism.

Catholic Ireland told us we didn’t matter; that it was our job to be compromising and compliant, seen and not heard. Feminism told us that we did matter; that we had a responsibility to be assertive and demanding and seen and heard. Both sides told us that if we followed their rules, good things would come our way. It was very confusing.

In response, we focused on trying to have it all: to be nice and successful and kind and assertive and loving and financially independent and a present parent and a desirable partner, often all at once. No wonder we’re shattered. Predictably, having it all became doing it all.

You may be in the trenches, but I bet there are other fantastic, funny women in there with you.

Calhoun points out that an entire industry has been built up around making us feel worse about ourselves. If we aren’t getting paid enough at work, it’s not because of that chunk of time we took out to care for our families. Or it’s because we didn’t lean in enough.

If our relationships or our bodies or our careers or our plans to have a family or our finances aren’t going as well as we hoped, there’s a whole section of the bookshop ready to confirm our own suspicions that we’re just not trying hard enough.

The answer, I think, lies in acceptance. We tried to have it all, and the experiment has not been a resounding success. Mostly, what we have reaped for our efforts is guilt and exhaustion.

On the other hand, we’re still here. You may be in the trenches, but I bet there are other fantastic, funny women in there with you. I know who mine are, and they know who they are too. I might have a phone voice and a long list of other inadequacies, but I’m pretty sure my husband and children wouldn’t swap me for anyone else.

Róisín Ingle: Deck the feckin’ halls. That is an order
9