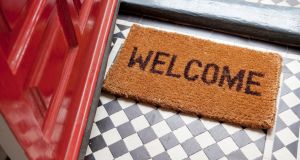 There is a certain onus on the host to offer a generous welcome without issuing too many pernickety caveats. Photograph: Getty Images

Blame the ads if you like, but it seems as though it isn’t the festive season until someone has gladly thrown open their hearth to all and sundry. And while the turkey, tinsel and tinnies might be over for another year, there is always the new year to get through. We all have friends who think it’ll be fun to ring in the new year in Ireland – and if you don’t mind crowds or €7 pints, it is – but will baulk at the vastly inflated price of an Airbnb for the night. No harm in having them stay at my place for new year, you’ll think. Sure they’ll probably be out most of the time anyway, you tell yourself.

One solo-dwelling friend loves nothing more than opening her home to waifs and strays, and rather splendid she is at it too. A generous and considerate host, she’ll think of nothing as a young relative moves into the spare room for months at a time, or a friend arrives from the United States for an extended stay.

On the flipside, there are many Irish people who prefer to think of their homes as a private sanctuary. They save the generosity and cheery warmth for the pub, but like to keep the world at arm’s length when they shut their front door. And we do cherish our personal space; we need the recharge before we head back out into the world. Ever noticed, for instance, how we never just drop in to neighbours or friends without warning anymore? I brought this up with a friend recently and he admitted: “I wouldn’t dream of opening the door if someone dropped by unannounced”. “But what if there was some kind of emergency?” I asked. “They can text me,” he shrugged.

Me, I’m somewhere in the middle. I’ll open the door, I might even offer to put pals up, but start to get a little anxious when people make talk of staying on for a few days. Perhaps I’ve had one too many bad experiences of having out-of-towners stay in my small apartment. One business acquaintance came for an evening and attempted to stay for a week (we hung uneasily under my cloud of passive-aggressiveness for a few days before it all spilled over with the mother of all tantrums). A distant relative stayed, albeit after I invited her, and took up near-permanent residence on the sofa, rather enjoying a fortnight of duvet days while I worked at a desk nearby (and then used all the spendy shampoo). Then there was the American friend of a friend who’d clearly heard much of this famed Irish hospitality and would spend morning after morning moaning about how dreary Ireland was, until I duly sent her on her merry way to Donegal (her impression of the place perked up a lot after a quick fling with a man from Letterkenny. But still). It all felt like a territorial invasion, and I’m not proud to say that in most cases, it put me on the defence.

But there is much to learn in this, both as a host and a guest. First things first: guests, do not show up, as my mother would say, with one arm longer than the other. Bring something. The using of the spendy shampoo, too, can be appeased with a nice bottle of wine, or box of chocolates; a token that simply says, “I acknowledge that I’m coming into your primary space, and I appreciate that”.

As a guest, it certainly helps to be unobtrusive and aware of personal space, especially if your host is a solo dweller. People who live on their own are often exacting and introverted sorts. They live on their own – and often pay handsomely to do so – with good reason. And while it is lovely to avail of a person’s hospitality, it also helps if you offer to load a dishwasher from time to time, make your bed and take your own hairs out of the shower plughole.

On the flipside, there is a certain onus on the host to offer a generous welcome without issuing too many pernickety caveats.

Fine, your routine and norms have been temporarily upended, and lack of control can be stressful. But really, all it requires is a little more adaptive energy. If you’re worried about something being broken, or your brother putting a ciggie burn in your favourite duvet cover, or a pal drinking your beloved craft beers, keep them out of the way. A friend or relative isn’t going to know exactly what is more or less valuable.

A small but effective way of making guests feel at home is to offer them a stash of travel-sized toiletries, and having lots of towels around is a great way to reduce guest-stress. Keeping a steady supply of easy-to-serve snacks, like cheese and crackers, is also good for keeping stress levels down; both theirs and yours.

This might not be the most subtle of moves, but offer your guests a “survival guide” to your hometown, complete with restaurant recommendations and brochures of things to do. This might minimise lolling about on the couch (and your guests might be looking for personal space, too).

Perhaps the most important rule to keep close to mind is that we’re not really meant to spend all that time in each other’s pockets. If you’re worried about getting your visitors – now sated on cheese and crackers and mini-soaps – out of your hair, have one final meal celebrating your being together for a final night, and they should take the hint. If all else fails, you could always offer to drive them to the airport.

Sunny side out in tropical Sandymount semi for €1.595m
10