Dublin’s newest day out is world-class. The only quibble is the cost

Are We There Yet? The Explorium: A sports-science wonderland with oodles to do 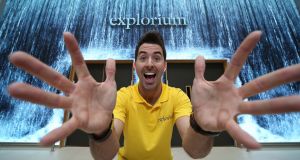 There are times – I’m looking at you Jump Zone – when a day out with your kids doesn’t have much in it for adults in terms of entertainment. Then there are other days when you find yourself in a shiny sports-and-science facility playing endless games of a table-top version of the Atari classic video game Pong, while your children are immersed in a science experiment involving time and space. On that day you can congratulate yourself for finding your way to Explorium, Dublin’s newest and possibly most diverting day out.

You might have been here before, back when it was a sports centre that sometimes hosted kid’s birthday parties. It’s unrecognisable now and massive: set on a 25-acre site and sprawling across more than 10,000 sq m (107,000 sq ft), Explorium has more than 300 exhibits designed, according to the sales pitch, “to ignite curiosity in its visitors, both young and old, and inspire them to discover the wonders of science through sport”.

The sales pitch doesn’t disappoint. Explorium is a sports-science wonderland, sitting in the foothills of the Dublin mountains, with – on the late afternoon in winter we visited, anyway – the lights of the capital twinkling far below. From the moment you walk in, there are head-turning things to see and do.

The first thing that catches the eye is a giant animated waterfall and beside it, turbo bicycles that intrepid people (not me) cycle in loops. There’s a harp with invisible strings (laser technology, my inner scientist advises), a human hamster wheel and a small workshop where kids can make stuff. There is also a restaurant complete with robotic waiters. But we had no time to make small talk with robots.

Upstairs, things take a turn for the sporty. Show-offs can sprint along the elite speed track and see how quickly they accelerate with the help of laser technology again, or test their hamstrings or agility using state-of-the-art technology employed in real life by certain overpaid dudes in Real Madrid.

I was shown all of this by Mark Langtry, head of sport and science at Explorium. The former Shamrock Rovers footballer with quifftastic hair is a TV presenter of kid’s science show Let’s Find Out on RTÉjr and has a degree in theoretical physics from University College Dublin.

“I landed my dream job,” Langtry says in the manner of a sporty science nerd who can’t believe his luck. “I never want to leave here. I’d sleep here if I could. Kids thinks science happens in a classroom but we wanted to show that science is much more than that and is happening all around us every day.”

Explorium is a fantastic, endlessly engaging, educational, fun and – yes, if there’s a few of you – expensive day out

He’s an enthusiastic and deeply knowledgeable guide, explaining the physics behind why lying on a bed of 3,000 nails – they have one here, of course – doesn’t hurt. Something to do with the relationship between force and pressure. I decide to take his word for it.

We take funny photos in the upside-down rooms and Langtry is very kind when I nearly freak out in the gravity zone, which is a zanily painted, slightly elevated space that makes you feel what it might be like to walk on the moon without the intense astronaut training. (Nauseating and very disconcerting, take it from me.)

I also beat deeply competitive Langtry several times at Pong and he had the grace to be visibly annoyed about it, which I liked.

He showed us the giant animated fish tank where children can draw their own fish, have them scanned and before you can say “Explorium”, their very own crayon fish are swimming around in the tank. They say it’s science but a lot of this feels more like magic.

There is a catch. The cost. Everyone I’ve mentioned the individual €28 ticket price to has balked. And if you compare it to the W5 Discovery Centre in Belfast, the closest comparison in terms of scale and content, Explorium is definitely pricey. A family of four can visit W5 for around £30, or about €35. The same family will spend, depending on the children’s ages, between €80 and €110 to enjoy the delights of Explorium.

It’s a significant difference but worth pointing out that W5 is a not-for-profit organisation while Explorium is a private enterprise. The main backer is retired businessman James Mangan, formerly of Paddy Power, and entrepreneur and philanthropist Niall Mellon has been involved operationally.

There are loads of other activities here: top-class climbing walls – six of them – and one of the world’s largest indoor caving facilities, which the children loved. An hour in there or on the climbing walls will cost €15. The good news is you can book just for caving or climbing and skip the main facility. But if you do that you’d really be missing out.

Explorium is a fantastic, endlessly engaging, educational, fun and – yes, if there’s a few of you – expensive day out. Is it worth it? I think so but I’d still like to see them bring the price down to make it more accessible. As much as I loved the place and as thrilled as my children were by our visit, the €28 ticket price means it’s something many families will not be able to afford and that’s a shame.

When I put this to Explorium, they said that last weekend they accommodated 2,500 people, with less than 1per cent of these visitors giving feedback that took issue with the price. And I should point out that you could easily spend four hours exploring Explorium, which works out at €7 per hour per person (over the age of eight). There’s also a junior Explorium for under eights, and tickets for this are a more accessible €12 per child.

Quibbles about cost aside, making learning fun isn’t easy but they’ve done that beautifully and with lots of thought here: interactive lessons about anatomy, biology, nutrition, physiology, and sports psychology. You can direct movies, solve puzzles or take part in chemistry experiments.

Explorium is a world-class facility, and an important addition to not just sport and science, but to children’s cultural life in the capital.

But like I said from the start, they had me at Pong.
explorium.ie

Other things to do with children this weekend ...

Pantos
There can’t still be pantos on can there? Oh yes there can! And there very much is. If you can’t let go of Christmas, head along to the Gaiety Theatre or to the Helix in Dublin for the brilliant Snow Queen and the superb Robin Hood. For details and tickets, see gaiety.ie and helix.iegaiety.ie.

Winter Funderland
This is the final weekend for Ireland’s most beloved annual funfair, which is on until January 13th, so make the most of the rides, the ice-skating rink and Europe’s biggest indoor theme park. Winter Funderland, Simmonscourt, RDS, Ballsbridge, Dublin 4, 01-4853045

Mary Poppins Returns
Yes I know, I can’t believe I haven’t seen it either but this weekend I am going,
even if I have to go on my own. (For some reason I am having a job persuading my kids to come. “Too old-fashioned,” they tell me.) I am recommending this film on the back of the rave reviews from good friends of mine. But really, music, Mary Poppins, Emily Blunt, Colin Firth and the actual Dick Van Dyke; what could be better? It’s still on in cinemas such as odeoncinemas.ie, so off you go. Spit spot.