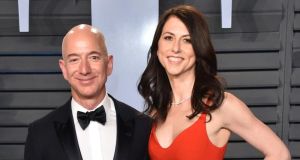 They are the couple who could be called the parents of Amazon.com, and now the split of MacKenzie and Jeff Bezos is casting a spotlight on the woman who might soon become the world’s wealthiest, in a divorce whose financial settlement is set to eclipse those of other high-profile separations.

The pair’s announcement on Wednesday that they plan to divorce was a reminder that the planet’s “richest man” is actually one-half of its richest couple. Bezos founded the firm in 1994, after the then-newlyweds left New York City for Seattle. MacKenzie, who is now an acclaimed novelist, was a key player in Amazon.com’s early days in a suburban garage in the city: according to a 1999 report, she negotiated the company’s first freight contracts from a Starbucks attached to a Barnes & Noble bookshop near their home.

That implies she might have a right to a large share of her husband’s reported 16 per cent stake in the company, which currently gives them an estimated fortune of almost €120 billion. MacKenzie, who is 48, would become the world’s richest woman were she to receive half of their wealth. That title, according to Bloomberg estimates, is currently held by the L’Oréal heiress Françoise Bettencourt Meyers, whose net worth is estimated at $45.6 billion, or about €43 billion.

Unless there is a prenuptial agreement, an equal split would be likely under state law in Washington, where the Bezoses and their four children made their home. Even were MacKenzie to receive only a 10 per cent share of the Bezoses’ fortune, the divorce could become the most expensive in history, far outstripping the following five costly splits.

FIVE OF THE MOST EXPENSIVE DIVORCES

Dmitry and Elena Rybolovlev: Up to €3.5 billion

One of the highest previous awards in a divorce case came in 2014, when a Swiss court ordered Dmitry Rybolovlev, a Russian billionaire, to pay his wife, Elena Rybolovleva, more than €3.5 billion. It followed a six-year legal battle that included allegations that Rybolovlev had tried to move assets out of reach; Forbes reported that property shifted to overseas trusts included an €80 million Palm Beach mansion bought from Donald Trump, a €75 million penthouse on Central Park West, in New York, and the Greek islands of Scorpios and Sparti – reportedly worth €130 million – which had belonged to Athina Onassis. The pair were plunged into more litigation when a higher court slashed the multibillion-euro award to about €500 million. The pair eventually came to an agreement; although its terms are confidential, they are likely to have settled on a sum somewhere between those that the two courts had ordered.

In 1999 the French businessman, art dealer and racehorse owner Alec Wildenstein agreed to a settlement of more than €2 billion in his divorce from his wife, Jocelyn Wildenstein, a New York socialite. The Telegraph reported that she had spent more than €2 million on plastic surgery to make her husband more interested in her, but he “screamed in horror when he first saw her new face”. It added that she declared during their negotiations that she needed $1 million a month to run her household, “as years of dependence on servants had left her with no idea of how to light a stove, make toast or boil an egg”.

The media magnate Rupert Murdoch came to an expensive divorce agreement with his first wife, Anna Torv, after 32 years together. In 1999 he is said to have agreed to give her about €1.5 billion. Time magazine reported that he signed a prenuptial agreement with his next wife, Wendi Deng, whom he married just 17 days after his divorce from Torv became final. It meant that when Murdoch and Deng divorced, 14 years later, she received “several luxurious homes” but “wouldn’t get quite the payoff of her predecessor”.

The Formula 1 tycoon Bernie Ecclestone and his wife Slavica – 28 years younger and almost a foot taller – had a family fortune estimated at more than €2.5 billion when they filed for divorce, in 2008. Slavica reportedly received half of it – but by 2014 her trust fund turned out to have paid her ex-husband more than €300 million. Time attributed the unusual scheme, which used money from an offshore account, to an agreement they made more than a decade before they divorced.

The casino magnates Steve and Elaine Wynn are unusual in having married and divorced not once but twice: they ended their marriages the first time in 1986 and the second in 2010, at a reputed cost of $1 billion. The precise terms have been kept private, but, after their second split, Steve Wynn agreed with an interviewer that it was one of the most expensive divorces of all time. – Guardian, agencies