‘Honor cops me standing there, staring at her with my mouth open, like she’s a dog explaining Brexit’ 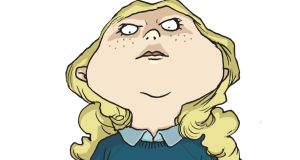 Honor opens the door on the driver’s side and steps out – except she’s too small to step out. She sort of, like, drops out

My cor has been stolen. Yeah, no, I’m talking about the black X5 that I bought myself for Christmas. I look out the window to smile at it – something I do six or seven times a day – and the thing has literally gone.

Of course, the Gords are no use. The dude on the phone goes, “Did you buy it new?”

“Then you’ll know I didn’t buy it second hand. Sorry, is there someone more senior I can talk to?”

I end up not hearing his reply because I’m suddenly staring out the window at a sight that causes my blood to turn cold. The cor is coming up the driveway – and Honor is behind the wheel.

The dude on the other end of the phone is going, “Hello? Are you still there?”

But I don’t answer him. I can’t I’m just, like, rooted to the spot, watching my 13-year-old daughter expertly steer the cor into the space between the swing chair and her old dear’s Nissan Leaf.

She puts the thing into pork, then kills the engine. I hang up on Sergeant McDumbfock and I race out to the gorden. Honor opens the door on the driver’s side and steps out – except she’s too small to step out. She sort of, like, drops out.

She opens the boot and storts taking out shopping bags. And that’s when she cops me standing there, staring at her with my mouth open, like she’s a dog explaining Brexit.

“What the fock is your problem?” she has the actual cheek to go.

I’m there, “Honor, where have you been?”

She holds up her bags like it should be somehow obvious. “Er, Dundrum,” she goes.

I’m there, “Yeah, no, I kind of guessed that. What I mean is, what do you think you’re doing driving my cor?”

“I wanted to go shopping. It’s the last day of the January sales. And you refused to drive me.”

“I refused to drive you because your mother told you that you got enough for Christmas.”

“Who the fock is she to tell me that I got enough? Have you been in her walk-in wardrobe lately? There isn’t an inch of rail that doesn’t have something hanging on it.”

“Okay, somehow this has turned into an argument over who has more clothes than who. My point is, who told you that you could drive?”

“Oh, please! The thing is automatic! It practically drives itself!”

It does practically drive itself.

“So you do see what I’m saying? You’re too young to be behind the wheel of a cor.”

“Yeah, right! I’m a better driver than your wife!”

That’s actually true. I know they say we praise our children too easily these days but I thought the same thing when I watched her swing into the space.

“Anyway,” she goes, closing the boot then attempting to step past me, “if that’s all you have to say on the matter, I’m going upstairs to try on my purchases”.

I decide to do the whole tough love thing. I actually raise my voice, something I rarely, if ever, do to Honor.

“No,” I go, “that’s not all I have to say on the matter! I want this to be the first and last time you ever do something like this!”

She laughs in my face, then she says the most incredible thing: “The first time? Dad, I’ve been driving your cors for, like, two years.”

I’ll just tell her that, oh my God, Daddy left me all alone standing outside the pub and I had an anxiety attack and, in a total panic, I got into the cor and just drove.

I’m like, “That can’t be true. You’re just saying that to shock me.”

“The first time I ever drove,” she goes, “was one Saturday afternoon when we were in Dundrum. There was a jacket by The Kooples in BT2 that I really liked except they didn’t have it in my size. But I checked online and they had it in Kildare Village.”

“You were in Winter’s, or whatever that pub is called, watching the rugby. You’d asked me to mind your cor keys because you were scared of losing them.”

“So I just thought, ‘Fock it,’ and I decided to drive there myself.”

“Well, they had my size, but I didn’t like the colour. It kind of washed me out.”

“Of course I did! What did you think I was going to do? Take the back roads through Saggart?”

Honor has left me standing there with my mouth agape many, many times in her life. But this must be the most shocking thing she’s ever done. Top five, definitely.

I’m there, “Honor, I wouldn’t be any kind of father if I just laughed this off. So, unfortunately for you, I’m going to have to ground you.”

She goes, “Ground me? You’re hilarious!”

“Dad, to ground me, you’d have to tell Mom what I did. And you wouldn’t want to do that?”

“Because that would mean having to tell her that, whenever we go to Dundrum on a Saturday afternoon, you let me go off by myself while you go to the pub.”

“Only if there’s rugby on.”

“I’d really turn on the tears. I’ll just tell her that, oh my God, Daddy left me all alone standing outside the pub and I had an anxiety attack and, in a total panic, I got into the cor and just drove.”

“I still reckon she’d be more angry with you than me.”

At that exact second, Sorcha steps out of the front door. She sees Honor holding all her bags and she goes, “Oh my God, Ross, did you take her to Dundrum?”

Honor stares at me for a good 10 seconds until I eventually go, “Yeah, no, I did.”

And Honor fake-smiles me and goes, “That’s because he’s the best daddy in the world!”

Election 2020 in commuterville: ‘They built the houses and left the people in a vacuum’
10